The Great Ecstasy of Woodcarver Steiner (1974)


This magnificent documentary is a both a study of sporting endeavour and a journey into the psychology of a man willing to risk his very existence to attain his life long dream of flight. The Swiss ski jumper/flier Walter Steiner is probably Werner Herzog’s perfect protagonist. Steiner is an exceptional and introverted figure, a man on the edge of the world, who lives a life of contrasting and conflicting emotions. On the one hand Steiner lives a simple rural life in which he spends his days quietly carving objects out of wood. He appears unassuming and shy, somewhat awkward and self conscious in front of the camera, although when left to his thoughts is surprisingly eloquent and poetic. Herzog deftly emphasises the mundane aspects of Steiner’s life which allows for a far greater impact when we see Steiner launching himself at ridiculous speeds into the alpine skies and clearing 170 meters. The film opens with this image - a beautiful but eerie shot of Steiner in slow motion, his mouth agape, the mountainous backdrop still and implacable and the ethereal music of Popol Vuh giving the shot a resonance and grandeur that slips it into the realm of the ecstatic. 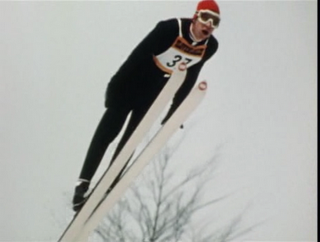 Herzog repeats these images throughout the film and one never tires of their breathtaking beauty. But the sublime glory of these images is inter-cut with images of ski fliers crashing, and tumbling over and over into concussed oblivion. The fine line between a successful flight and death is explored through Steiner’s own fears about the direction that ski flying is going in. The bulk of the film follows Steiner as he competes in a championship in Yugoslavia - and the narrative of Steiner comes to life when we see that he isn’t fearless and heroic, but a vulnerable man being pushed towards flights of outstanding recklessness by tournament organisers intent on generating publicity. Steiner finds himself between a rock and a hard place - in one respect he is desperate to continue pushing the boundaries of his sport out of sheer love for the exhilaration it gives him, but he is also painfully conscious of the fact that he is being used, forced to put on a show for 50,000 eager fans, but fans that leaves him isolated and ignored if he fails. Steiner’s dreams are frustrated by the fact that they are reliant on other people, and as the final epilogue notes his only wish is to be the last person on earth. 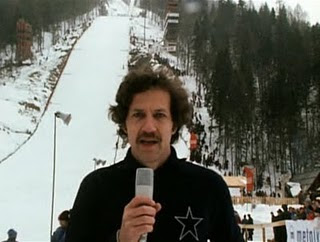 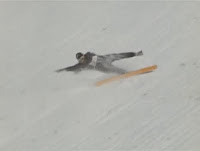 This is also a film about Werner Herzog - like Steiner, Herzog has also found himself in a position where he is under pressure to take risks, to maintain a myth and legend created by the media (the extent to which Herzog has actively contributed to this remains unknown). Herzog narrates this documentary and appears on screen talking direct to camera, he contextualises the event in Yugoslavia, and is able to bring across in his breathless enthusiasm the magnitude of Steiner’s achievements. Herzog makes no reference to the Silver medal that Steiner won in the 1972 Olympics, but prefers to take Steiner out of time and space, placing the events we see in this documentary in a snowy void. The obsessive manner in which Steiner seeks perfection offers a mirror to Herzog’s filmmaking, and there is a sense of comradeship between the two men - a common bond of hardship and misunderstanding. That said Herzog is clearly in awe of Steiner, and the slow motion footage is a clear indicator of Herzog’s strategy to make Steiner appear super human. 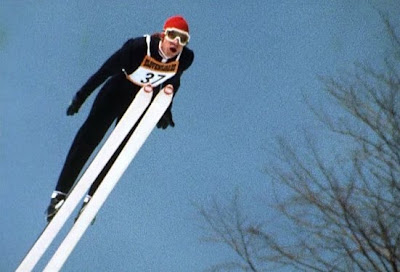 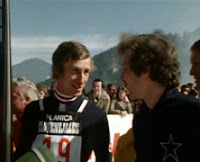 At the end of the film Steiner is given time to recall an anecdote from his youth about a pet Raven that was eventually killed by its own kind. This highly symbolic tale seems to offer a metaphor for Steiner - badgered by his own kind, when he all he wants to do is fly. But is this a genuine tale from Steiner’s youth? or one of Herzog’s interventions to present the audience with the ‘ecstatic truth’ he wishes to convey? This is a very poignant conclusion to a film that celebrates the ecstasies of one man’s desire to fly, that offers us insight into the internal complexities of an individual in the throes of an odyssey. In just forty five minutes Herzog packs into the film virtually all of the themes and concerns that make up his cinema - this is arguably Herzog’s most important film, and the strongest indicator of the persistence of the vision that he has followed throughout his career.
Posted by Shaun Anderson [The Celluloid Highway] at 20:45