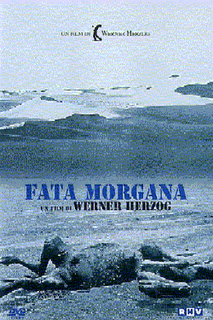 
Fata Morgana is the most oblique and inscrutable of Werner Herzog’s early films. It is neither a work of fiction, nor a documentary. But exists within a liminal space between these two spheres of representation. It is totally devoid of plot, employing none of the narrative conventions of Hollywood cinema, preferring to approach time and space from a position of non linearity rather than cause and effect. The editing strategies employed in post-production emphasise this attitude towards time, and the result is a film that has the timeless quality of a myth or a fable. Its position as myth is clearly signposted by Herzog’s inclusion of the Popol Vuh (a Mayan creation myth) which is narrated over the images by German film historian Lotte Eisner. This is further confirmed by a three part structure which gives the film the appearance of a meditative and free flowing essay. The three parts are titled Creation, Paradise and The Golden Age and are an echo of Herzog’s early conception of the film as a science-fiction document of alien visitors recording their findings of a long dead civilisation. The imagery that Herzog selects however often undermines the chapter it is within - The Golden Age for example has a number of deeply ironic and unspeakably sad scenes, and Paradise offers us the vista of a blasted landscape crushed under the unyielding glare of the sun. There is subsequently a deep contradiction at the heart of Fata Morgana, a contradiction that seems to exist within most of Herzog’s films, and which makes the viewing experience an oddly disquieting one. 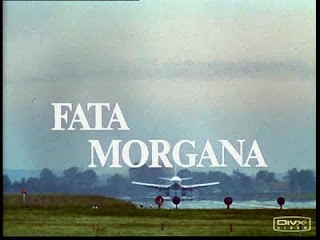 The film opens with a series of jump cuts showing us a variety of aircraft landing on an airstrip. This would be tedious beyond endurance were it not for the subtle differences in each shot. Herzog is showing us the effect of heat upon the image, and pretty soon the aircraft start to shimmer as though they lack solidity. Herzog’s position towards imagery is implicitly spelt out here - a normal everyday image is subverted and becomes something alien, it possesses an otherness which makes us regard it from a fresh perspective and with eyes unaccustomed too its ethereal beauty. This is a very effective metaphor to launch a film that asks us to make sense of a new lexicon of images and explores the fragmented reality of desert mirages. The opening twenty five minutes gives us shot after shot of a primordial landscape - mountainous, barren and redolent of death and decay. Herzog shot many of these images in the Sahara Desert, and even when he is offering us familiar and beautiful tracking shots of the undulating dunes they still speak of something ancient and primitive - their sheer emptiness offering up a silent lament to a civilisation unable to comprehend such an environment. The centrepiece of these early exchanges is the various mirages that Herzog and his two cameramen Jorg Schmitd-Reitwein and Ed Lachman manage to capture. The mirages are very strange, one shows a blurry automobile going back and forth, but the most perplexing is a coach load of tourists - all images that didn’t exist in that time and space, but were distant reflections of some other temporal and spatial plane. 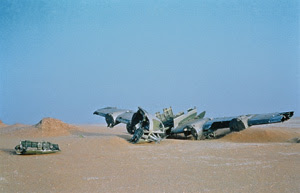 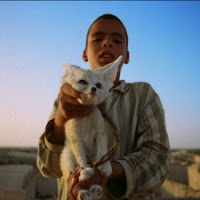 The film slowly but surely enters the world of man. The first signs of civilisation are unsettling rather than comforting - hundreds of empty oil drums for example, broken machinery, a factory left half built and abandoned, a downed aircraft. The decaying and dusty remains of animals offer up a stark reminder as to the difficulty of existence in this most unforgiving of terrains. But hardened people battle on - Herzog shows us two men working arduously in a lime pit, a sad confusion etched on their weather beaten features. They remain in shot just long enough for the tableau to become uncomfortable and obtrusive. The children of the village are unsure how to react to the aliens in their midst, both repelled and attracted to a camera that seeks to capture a brief snippet of their lives. Herzog also shot in Algeria (a tracking shot of a ghostly military compound providing an inkling of the risks the filmmakers underwent), Burkina Faso, The Ivory Coast, Kenya, Lanzarote (the volcanic Canary Island on which Herzog shot Even Dwarfs Started Small (1970) at the same time as he culled footage for this film), Mali and Tanzania. The aerial tracking shots over the African coast are some of the most sublime images in the film - a mass of Flamingo’s a pink blur against the salty crust of the water. 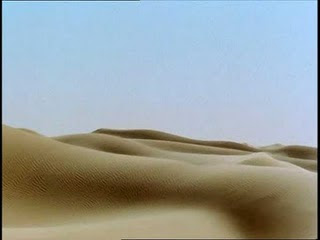 Herzog unwittingly gives the film a meditative and spiritual tone. A tone which often seeps into his films more by accident rather than design it would seem. The musical selections only add to this odd religious discordance - classical selections from Handel and Mozart go hand in hand with the rock music of Blind Faith and Leonard Cohen, and the avant-garde expressions of the Third Ear Band. The effect is hallucinogenic and esoteric in the extreme. But at times Fata Morgana strays perilously close to pretension and tedium. The images are breathtaking but their repetition can be damaging to the film as an entertainment. This film requires a major leap of faith on the part of a very willing audience, and as a result is probably the last film I’d select to introduce people to Herzog’s cinema. It would either convert them for life, or turn them away forever. But as a conceptual documentary Fata Morgana is peerless in Herzog’s filmography - it is his most undiluted examination of the need for new images, and his most poetic treatise on mans interaction with some of the harshest environments on Earth.
Posted by Shaun Anderson [The Celluloid Highway] at 23:15