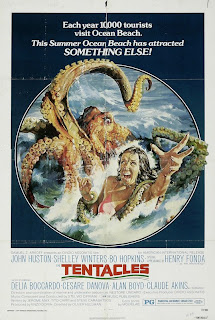 
The inhabitants of the pretty summer resort of Ocean Beach are in for an unforgettable summer in this totally forgettable creature feature. This was one of numerous attempts by witless and unimaginative Italian producers to imitate Steven Spielberg’s summer blockbuster Jaws (1975). In the words of horror nerd Kim Newman writing in his book of lists Nightmare Movies “Since the end of the romance between art house and the Italian cinema, Rome has become the Taiwan of the international film industry.” Although things have changed somewhat in the last twenty years, the observation certainly held water when Newman made it. But despite the atrocious dubbing, poor acting, and laughable special effects Italian ‘revolt of nature’ rip offs differ slightly from their American brethren. A greater concentration is placed on the set piece sequence, in contrast to a reckless disregard for characterisation and depth. Although Jaws was a monster movie the most memorable aspect of the narrative is the interaction between the three male leads and the exploration of their myriad vulnerabilities and insecurities. Tentacles isn’t interested in that kind of thing at all. It is also only interested in the ecological and environmental concerns that underpin much American ‘revolt of nature’ narratives in passing.

The director of this piece of cinematic plankton was Ovidio G. Assonitis, working under the imaginative pseudonym of Oliver Hellman. Assonitis also acted as producer and is so hell bent on copying Spielberg that he opens his film with a direct steal of the famous beach scene from Jaws in which bathers pass in front of the nervy Captain Brody and disguise the cuts. In Tentacles it is a baby inside a pram instead of Roy Scheider that is the focus of the camera…in typical Italian bad taste this is to be the first victim of the rubber octopus. Although it occurs off camera we are asked to believe that a tentacle emerges from the sea and plucks the child to a watery doom…this kind of stupidity is only the tip of the iceberg for a film that obviously believes its audience has the intelligence and attention span of a goldfish. 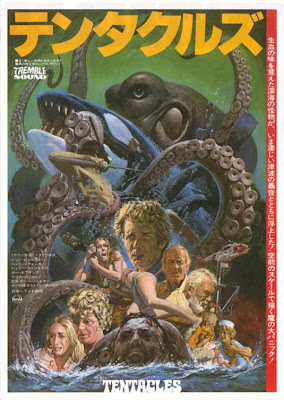 I love Jaws, but the cinematic excrement that it spawned seriously polluted the waters in the late 1970’s. Examples include Shark Kill (1975), Mako: Jaws of Death (1975), Tintorera (1977), Orca (1977), Barracuda (1978), Killer Fish (1979), Blood Tide (1981) and Great White (1981) - this is without mentioning those films such as Piranha (1979) that feature other aquatic beasts. However none of these so basely and moronically plagiarise Jaws as much as Tentacles. Despite this there are still a few things to recommend though (I love the horror genre so much that even garbage like this isn’t a complete waste of time!). Firstly the film is shot in California and the locations are beautifully captured by DOP Roberto D’Ettorre, and secondly the producers somehow (probably through blackmail) managed too assemble a cast that includes John Huston, Henry Fonda, Shelley Winters and Bo Hopkins. All of these talents bring a level of interest to the film, especially Huston as the journalist Ned Turner, who smells something fishy going on. However the manner in which these characters drift lazily in and out of the story is evidence of a mangled screenplay, and offers proof that four heads are not better than one. 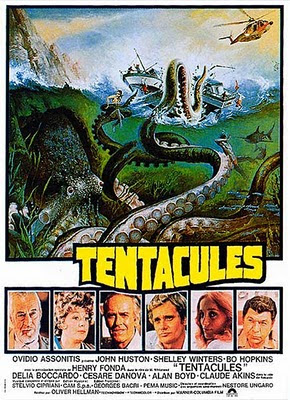 Nevertheless Ass(onitis) wont be dissuaded from his remit to copy Jaws as much as possible. As a result of this strict adherence to Spielberg’s film one or two of the set pieces possess resonance. An attack on a boat of solitary bathers is possibly the films highlight. For once the tentacles do look menacing rather than laughable. Naturally the news that a giant octopus is running amok in the waters of Ocean Beach doesn’t deter an annual yacht race! Assonitis actually composes a well structured sequence here which cuts between a bunch of lazy fat assed holidaymakers enjoying a comedian and a bunch of kids being terrorised and eaten alive by the octopus. The closure of the film is a particular weak point with the beast having his tentacles kicked by a couple of loyal killer whales. A very undignified end for such a terrifying antagonist! 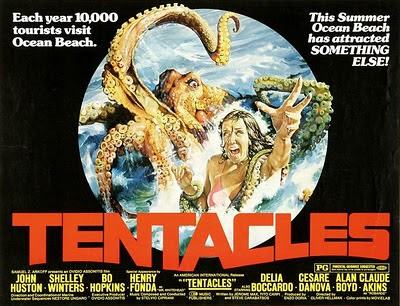 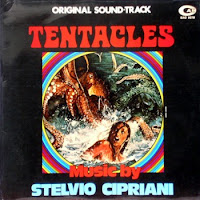 The soundtrack by Stelvio Cipriani cannot go unmentioned. I admire the work of Cipriani. He composed some excellent music for a number of Mario Bava pictures including Bay of Blood (1971), Baron Blood (1972) and Kidnapped (1974). However his efforts here totally annihilate any attempt to build suspense or create terror. The presence of the octopus for example his highlighted by a playful and jazzy leitmotif. It’s a brilliant piece of music, but it seems wholly inappropriate for this type of film. Cipriani also loses marks for ripping off John Williams, but one suspects he had little choice in this matter. Nevertheless one would have to say that the soundtrack is far and away the most enjoyable aspect of this tedious underwater romp. This is a film with numerous narrative tentacles all of which head nowhere…put Jaws on instead.
© Shaun Anderson - 2010
Posted by Shaun Anderson [The Celluloid Highway] at 17:16