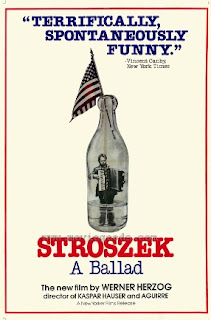 
One of the meta-narratives or major thematic concerns that preoccupied the generation of filmmakers that made up what scholars termed ‘New German Cinema’ was coming to terms with, and exploring, the cultural colonisation wrought on West Germany in the aftermath of World War Two by America. Wim Wenders approached the subject from the perspective of cinema itself in The American Friend (1977) and Kings of the Road (1976) and throughout his career revised the form of the road movie for a generation of alienated Europeans. Rainer Werner Fassbinder opted to explore the question through a reconstitution of Hollywood genre - most notably the Sirkian melodrama of films such as Fear Eats the Soul (1974). Whilst the films of these two ‘New German’ heavyweights were by no means conventional, Werner Herzog’s single contribution to this ongoing narrative is a truly wacky and oddball take on the subject. Stroszek was Herzog’s sixth fictional feature film and it was his first, and to date last, to be set (albeit partially) in contemporary West Germany. Up to this point Herzog had preferred to set his films in the past and in some cases on other continents, and used the storytelling method of allegory, metaphor and symbolism, to make comments on Germany and its recent past. In Stroszek Herzog concocted a narrative (partially based on the childhood experiences of Bruno S.) that enabled him to formulate his view at the time of both West Germany and America. Like most filmmakers of that generation Herzog’s vision is deeply ambivalent, but ultimately he suggests that all countries are alike in the manner in which they can crush the life out of their citizens - the only difference is in the method. 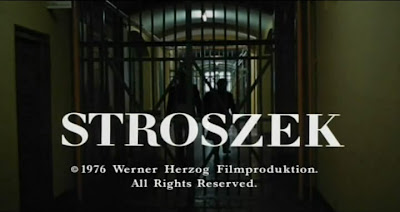 The film opens with Bruno Stroszek being spat out of the prison system into a lifeless and wintry Berlin. Bruno is a simple minded guy with an over reliance on alcohol who spends much of his time performing as a street musician and staring oddly into space. He is totally lacking in self awareness and is unkempt and scruffy, but he possesses a child like innocence and vulnerability that is both endearing and alarming. This role was written specifically for Bruno S. who was making his second appearance in a Herzog film after The Enigma of Kasper Hauser (1974). Bruno is scarcely acting here, and one gets the impression that the behaviour and mannerisms we see here are reality, the result is that Bruno is a walking documentary within the landscape of fiction. It is a marvellous performance and one of several that Herzog has managed to get out of non-professionals throughout his career. Simple-minded Bruno might be, but deep within him is an unfathomable sense of charity and generosity, and these are qualities that come to the fore when he assists and befriends Eva (Eva Mattes) a prostitute who is having a hard time at the hands and fists of two vicious and uncompromising pimps. The urban decay and brutal industrial façade of Berlin is filmed in the bleakest of terms by Herzog who likens it to the prison that Bruno is first seen in. It is a constrictive space, and one that Eva and Bruno are desperate to escape. Fortunately their friend Herr. Scheitz (Clemens Scheitz) is on hand to offer a way out and the unlikely trio head off to Wisconsin, USA. 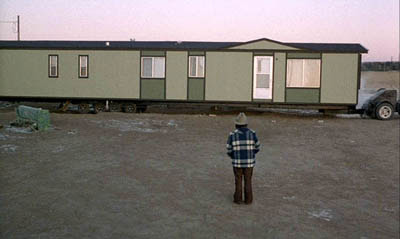 The first thing that happens in America is the confiscation of Bruno’s mynah bird, a minor event only briefly mentioned, but one that offers a foreshadowing of the unfortunate events to follow. After marvelling at the unrestricted landscape, the frail and brittle trio hit the road and eventually reach their destination of Railroad Flats. The difference between the two principal locations couldn’t be more noticeable - the camera opens expansively as it tracks along roads and arable farmland, icy ponds and miles of scenic woodland. This is a space where the characters can breathe and the sense of freedom they all so desperately crave is initially at least very visible. But this is also a community haunted by a series of murders and Herzog’s decision to shoot in the hometown of Ed Gein appears to be a statement on the artificiality and thinness of the everyday appearance of things. After the initial beauty of this idyll has died down and a mobile home has arrived for the travellers the film subtly begins to shift into the realm of nightmarish tragedy. Unable to meet the payments Eva returns to prostitution and in one of the film’s most heartbreaking moments snubs Bruno in favour of a life on the road with a trucker. After this moment the film spirals into outright surrealism as Herzog shoots one bizarre episode after another. 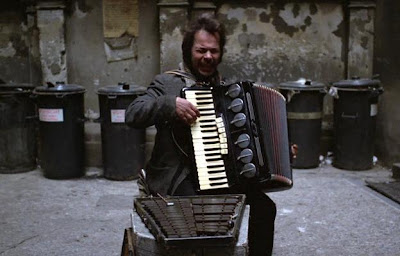 The shot of a desolate and lonely Bruno watching his mobile home being towed away is subtly devastating, and one of several savage attacks on late capitalism. The incompotent robbery and hold up by Bruno and Scheitz that follows bespeaks a culture raised on American movies, but one devoid of the wit and intelligence of the gangsters and thieves that populate Hollywood movies. They manage to steal $32 and a frozen turkey. Events finally reach a head at a depressingly tacky town which has been given other too amusements. The lament in this film is towards the indigenous Indian culture, which has been reduced to the indignity of amusements, and to labouring as mechanics. If Bruno is abused by the american dream, the Indians have been used by it. The legendary final image of a chicken dancing on a hot plate is both funny and inexplicably frightening and disturbing - it is a fitting way to end such a strange and organic film that seems to have emerged from the characters rather than anything scripted by Herzog.
Posted by Shaun Anderson [The Celluloid Highway] at 16:27