The subtitle to this short thirty minute documentary from Werner Herzog is 'waiting for an inevitable catastrophe'. Within that statement lies an aspect of Herzog’s approach to cinema that has helped to create a mythology of reckless risk taking, a sense that danger is a fundamental aspect in his never ending search for new images. Although an impression of catastrophe is not inevitable in Herzog’s cinema, there is always an echo within the frame of the extremities and hardships undertaken to achieve the finished product. More so than any other filmmaker, the act of filmmaking itself becomes an essential aspect to understanding the fictional world Herzog creates. The same idea can be usefully applied to his documentaries - but La Soufriere is surely the one in which the spectre of death and destruction looms most palpably in every frame. In late 1976 Herzog along with his two cameramen Jorg Schmidt-Retwein and Edward Lachman travelled to the Caribbean island of Guadeloupe, an island that had been evacuated due to the imminent explosion of the volcano La Soufriere. However a handful of peasants had remained on the island, despite claims by volcanologists that to do so would mean certain death. Intrigued by this attitude to impending death Herzog was determined to interview these men to get a better understanding of their cavalier approach to life.

The most impressive aspect of this film is the discovery on arrival of a totally desolate and empty landscape. The streets are deserted of all human life and starving animals mingle in a reclaimed kingdom they can scarcely survive in. In their rush to abandon this island death trap eerie aspects of a once bustling community show the futility of technology in the face of a natural disaster. The traffic lights impotently change colour in a pointless ritual, and televisions emit their noise to a deaf world. Herzog remarks at this point that the town has the eerie and apocalyptic feel of a science-fiction location, and the permanent quietude only adds to the sense of bleakness. As Herzog and his team make their way through the winding mountainous lanes (the dulcet and hypnotic tones of Herzog a permanent companion on the soundtrack) they come to within a few metres of the crater of the volcano. The swirling and eddying toxic gases permeate the air forcing our intrepid (or insane) filmmakers to flee for their lives. By accident or design this adds a layer of humour to the piece, not to mention the reckless absurdity of their own endangerment. 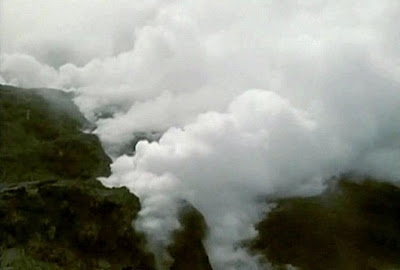 To add an extra layer to the proceedings Herzog dips into Caribbean history and alights on the eruption of Mount Pelee on the island of Martinique in 1902. A tragedy which saw 30,000 people perish, the only survivor a violent criminal, who was locked up in solitary confinement deep underground for being such a troublemaker. His survival seems to somehow reflect those poverty stricken individuals that have chosen to stay in Guadeloupe. Their position as men on the fringes of society is made clear, and the decision to remain behind is motivated as much by economics as it is a stubborn desire to make a statement. This decision though has enabled each of the men Herzog interviews to come to terms with, and accept, the inevitability of death. For all of them death is something they no longer fear, and each speak in a surprisingly laid back and relaxed manner as if to suggest that La Soufriere has relieved them of a large burden. They are all very impressive in front of the camera - showing an assuredness and punctuating their statements with a philosophical and poetical turn of phrase which suggests that their time alone on the island has enabled them to free their minds. 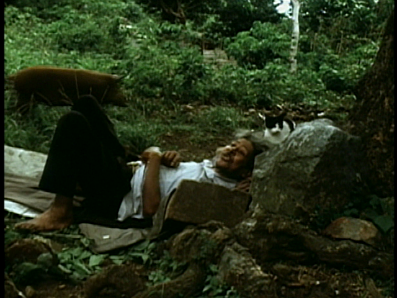 The absurd irony of the film though is that La Soufriere did not explode. It was an ‘inevitable catastrophe’ that didn’t happen. The experts got it wrong and Herzog was unable to film an island being wiped of all traces of civilisation. There is the impression in Herzog’s voice of major disappointment, a feeling that he is self-consciously aware that he has become something of a clown. That the insane risk he and his two colleagues made was ultimately for nothing. But a climate of futility permeates every aspect of this film and the conclusion seems to oddly fit this. La Soufriere is both a brave and stupid film, but at least offers us a fascinating insight into the limitations of modern civilisation.
Posted by Shaun Anderson [The Celluloid Highway] at 16:45