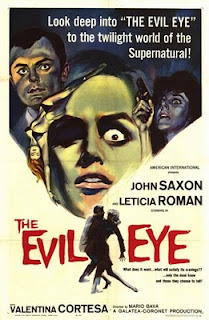 
Although certain plot elements of imported murder mysteries had been absorbed into Italian cinema (see Visconti’s Ossessione [1943]) Mario Bava’s The Girl Who Knew Too Much (1963) was the first to foreground them in a self-conscious manner. The protagonist Nora Davis (Letícia Román) is a voracious reader of murder mysteries, she clearly enjoys losing herself in the fantasy world, and craves a mystery in the real world that mirrors the exciting events on the written page. The instant she arrives in Rome from America to visit a bedridden aunt events are in motion over which she has no control. An early encounter in the airport with a drug smuggler is quickly followed by the death of her aunt, and this is soon followed by a mugging, and most importantly of all a murder to which she is a witness. These plot events and contrivances would be laughable were it not for the darkly humorous streak that runs through the film, and the filmmakers less than serious approach to the subject matter. In addition Bava and his collaborators choose too include a third person narrator who comments on Nora’s predicament and gives expression to her thoughts. Rather than weaken the narrative, this serves to tie the film very strongly to the literary source, and it becomes another self referential device along with on screen references to Mickey Spillane and Agatha Christie.

Although this is a self conscious attempt to introduce the giallo as a cinematic cycle The Girl Who Knew Too Much possesses a formal style that would be quickly discarded. From the perspective of visual style Bava’s second giallo film Blood and Black Lace (1964) would become far more influential. Bava chooses to shot in black and white, and while he makes several evocative contrasts between light and dark, and uses shadow in a visually exciting manner, the films lightness of tone does not warrant such a moody and sombre palette. The tone and flippant attitude to the material is in fact at odds with the visual style, and this is a tension that is never resolved, even in moments of peril for the heroine. From a narrative point of view though, almost every plot element of the giallo is present and correct; the tourist or cultural outsider who gets dragged unwittingly into a murder mystery, a convoluted and complex plot, a plethora of red herrings, and past events informing the present. The story and screenplay was a collaboration between five people (Mario Bava, Enzo Corbucci, Ennio De Concini, Eliana De Sabata and Franco Prosperi) and despite the multitude of minds the story holds up well. The problem is that the mystery itself is not particularly intriguing, and it is further hampered by the two lead characters who never really come alive as emotive presences in the film. 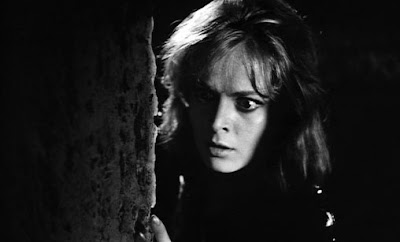 The performances are solid without being remarkable, and John Saxon does extremely well coping with his role as a bland romantic lead around which several running jokes revolve. He invests a rather thankless role with charisma and charm and emerges with his reputation intact (though not particularly enhanced) despite the non-existent character he has to work with. Román has a bit more to do. Firstly she has to prove that her tale of murder is not the result of a drunken hallucination brought about by her mugging, and then she has to contend with her own burning temptation to solve the mystery, this eventually becomes a necessity when she discovers she is the next in line for the unknown psychopath. The film also hints that the disbelief of the largely patriarchal and masculine circle she moves in may be motivated by the fact that she is woman. The default position for most of the men in this film is that she is off her head. But despite this Román is unable to invest the character with the requisite warmth and likeability that would make an audience want to root for her. I personally couldn’t have cared less whether she solved the murder or was decapitated for her curiosity. The one thing this particular girl didn’t know much about was eliciting audience sympathy. 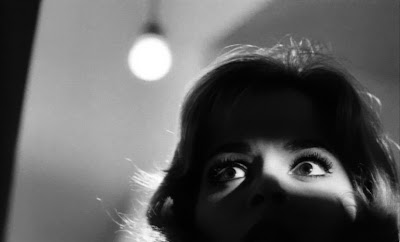 More than anything else The Girl Who Knew Too Much is a loving celebration of Rome. Although there are regular hints at the darkness beneath the surface, Bava indulges the artifice with gushing abandon. His camera lovingly picks out one beautiful location after another, and it becomes clear when watching this film why he was happy to remain in Rome instead of pursuing success elsewhere. Much of the film is given over to Nora and Marcello’s sightseeing trips, one of which is at the Colosseum. Meanwhile much of the action (and the murder itself) takes place at the Piazza di Spagna, which by daylight is a densely populated tourist attraction, and which by night becomes a dangerous and eerie space where violence lurks around every corner. The Girl Who Knew Too Much (the title itself a tribute to Hitchcock) is the first giallo, inasmuch as it’s the first film to shout it in your face. It possesses an influential narrative structure, but now stands out more for its unconventional visual style.
© Shaun Anderson 2011
In the best traditions of The Celluloid Highway I have concluded ‘Giallo Month’ with the first ever giallo. I have enjoyed this hazardous stroll through the plaza’s, parks, and bourgeois apartments of mainland Europe in the 1970’s. I’d like to offer my thanks to all those who have followed, commented on, and supported this 30 day departure into the kitsch and camp universe of this wonderful cycle of films. I’m off to toast the fact that I’ve survived this month without tearing my hair out and getting fed up, and I will see you in February for more of the regular stuff…Now where is that bottle of J&B?
-Shaun
Posted by Shaun Anderson [The Celluloid Highway] at 18:19