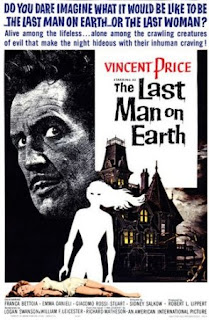 
Richard Matheson’s apocalyptic tale of contagion, holocaust, and vampirism I am Legend (1954) has assumed a position of major influence within the horror genre (even though the novel itself is arguably science fiction), but its adaptation to cinema has been fraught with failure. Almost immediately Matheson’s novel was destined to endure setback and frustration. Matheson wrote a screenplay for Britain’s Hammer Film Productions under the title Night Creatures, but the project was halted before filming began by a squeamish censor that was only just becoming accustomed to Hammer’s gothic horror. It remains one of the most tantalising missed opportunities of horror history. Its release would have come at the pinnacle of Hammer’s gothic horror cycle and would have offered a fascinating contrast to the trappings of gothic period settings. The next attempt at least made it to the screen when Matheson’s screenplay was picked up by Robert L. Lippert. The title was changed to The Last Man on Earth and was produced in Italy with distribution in the US handled by AIP. Matheson’s dissatisfaction with changes made by William F. Leicester, Furio M. Monetti and Ubaldo Ragona led to his decision to receive credit through the pseudonym Logan Swanson. The most risible screen version came in 1971 with Warner Bros’ Charlton Heston vehicle The Omega Man. A mindless action film that made wholesale changes in order to indulge Heston’s gun fetish and vile macho posturing. The 2007 version starring Will Smith could only improve on the absolute nadir that The Omega Man represented, but fell to prey to another fetish - that of CGI. Although Matheson expressed a negative view of The Last Man on Earth it does actually emerge as the most faithful rendering of the text, and in my view still remains the most accomplished screen outing for I am Legend.

The role of solitary survivor goes to Vincent Price who plays Robert Morgan in a manner which can only be described as unconvincing. The decision to cast Price in the role has dogged the film, with many believing his fruity theatricality to be misplaced. Although Price largely fails in conveying the hardened and embittered nature of a man who is the only survivor of a devastating pandemic, he does bring a haunted exhaustion to the role. The troubled and disturbed psychological make up of the character is handled well by Price, but it is the role of merciless slaughterer of the inflicted vampire populace that doesn’t sit comfortably. Much of Morgan’s emotional hollowness and ravaging fatigue is communicated through an interior monologue voiceover. A clumsy technique at the best of times, and a rather unimaginative substitute for the fact that Morgan spends 80% of the film alone. The shabby and decaying family home Morgan remains in does as much to communicate his desperation, and the boredom and apathy of his ritualised behaviour offers routine simply to fend off insanity. It has to be noted though that Morgan’s house is hardly the fortress alluded to in the novel and brought to life in The Omega Man (the only successful aspect of the film), it is a rather flimsy affair. It shouldn’t present too great a challenge to the vampire hordes that congregate around it every night. But the vampires are incredibly feeble and pathetic here, weaklings that Morgan has little difficulty in brushing aside. This is a major flaw, the vampires just aren’t threatening enough.

The creatures are chiefly repelled by cloves of garlic and mirrors, and when Morgan hits the eerie and desolate highways every day his tasks include replenishing his repellents and staking any vampires he can find. These brief moments are edited with a series of dissolves which does nothing to add to the impact. It shows that time is passing, but it doesn’t convey the violence and moral cost of the actions. The film lacks a strong scene showing Morgan eliminating his vampire enemies. The film shows its squeamishness here, but it makes up for it by showing Morgan hurling bodies into a massive pit that is aflame with hundreds of burning corpses. A structural weakness soon follows when Morgan slips into a reverie and we are privy to a very long extended flashback sequence. This flashback attempts to answer all the questions that Morgan’s interior monologue have yet to explore. But awkward moments for the plot are still left unexplored. For example the origins of the disease are never explained, it is merely airborne and arrived from Europe. The screenplay fails to explain why it has the effect it does, and the worst comes when Price attempts to explain his own immunity with some half assed memory about being bit by a vampire bat. What the flashback does achieve though is emotional resonance. It shows the heavy cost Morgan pays personally for his own failure as a biologist to locate a cure.

The direction by Sidney Salkow is plodding and unimaginative, and the film badly lacks an atmosphere of suspense and urgency. Fortunately the impressive monochrome cinematography of Franco Delli Colli partly makes up for Salkow's directorial shortcomings. The film utilises the twist in Matheson’s novel too good effect and its retention from the book is vital to what turns out to be a pretty ridiculous finale in which Morgan becomes an unlikely action hero. In his determination to wipe out the parasitic vampires, a task he adopts as a kind of holy crusade, Morgan is totally unaware that he himself has become a monster to those he seeks too annihilate. A legendary and mythical figure who haunts the daylight and brings death in the form of a wooden stake. In order for the world to progress Morgan must be eliminated, the perfection of his bloodstream now makes him a mutation. This final statement is handled extremely well (obvious religious symbolism aside) and The Last Man on Earth ends in a poignantly tragic and thought provoking manner.
© Shaun Anderson 2010
Posted by Shaun Anderson [The Celluloid Highway] at 16:15