Masters of Horror: Dreams in the Witch House (2005)


Many filmmakers have attempted to navigate the delirious cosmic terrors of H. P. Lovecraft, but Stuart Gordon has been the most persistent. I don’t rate Gordon particularly highly as a filmmaker, but he has achieved something nobody else has; he’s actually made a decent film based on Lovecraft material. In this case the blackly humorous Re-Animator (1985), a film which retained the spirit of Lovecraft, but bravely adopted a sardonic tone, the result of which was one of the most original variations on the themes established in dozens of Frankenstein films. Since then Gordon has returned to Lovecraft on four separate occassions with varying degrees of success. He followed Re-Animator with From Beyond (1986) and offered up a visually ravishing spectacle full of colour and surreal special effects, but sadly the film had more artifice than substance, and only rarely approached the agitated feverishness of Lovecraft. His third attempt at Lovecraft was Castle Freak (1995), based on the story The Outsider and was largely an unsatisfactory and uninspired affair. This was followed by Dagon (2001), a film which has cultivated something of a cult reputation, but once again betrayed the narrative and the sense of encroaching and impending doom in favour of highly impressive visuals and a colour palette bathed in a chilly blue. His fifth attempt was on the invitation of Mick Garris for the first season of Masters of Horror. Gordon chose to adapt the tale Dreams in the Witch House, and the result is easily Gordon’s feeblest and most lacklustre Lovecraft adaptation to date.

Ezra Godden plays physics grad student Walter Gilman, a sappy pathetic little geek whose expensive studies at the Miskatonic University (this implies the setting is Arkham) has forced him to take a room in a dilapidated and rat infested old house. The white vested slob of a manager is far from helpful, but Gilman is just looking for a quiet space so he can continue with his dissertation. Before long strange things are afoot, a downstairs neighbour prays loudly in the night while thumping his head on a wooden chair and warns him about rats with human faces. Next door is a single parent struggling to make ends meet, who offers at least a real sense of hardship and poverty. Before long Gilman’s dreams have been invaded and he must contend with odd noises coming from inside the walls of his bedroom. The drunken crank below warns of a witch, and although Gilman initially scoffs at this he soon begins to believe there is more to the old man’s tales than drunken ravings. The first encounter with the witch is a highlight; Gilman is babysitting for Frances (Chelah Horsdal) who has a job interview, and the witch appears to him as her. Their lovemaking seals his doom, and leaves him with some rather nasty scratches on his back. 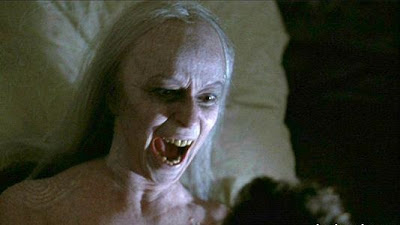 The rat with the human face turns out to be the witches’ familiar, and ends up doing a lot more damage than the witch herself. This creature is quite repulsive, and any horror the story has is generated by this foul and rather vocal pest. Because the narrative deals strongly with dreams and nightmares this immediately gives the writers (Stuart Gordon and Dennis Paoli) license to make nonsensical plot decisions. The action shifts with rapidity and without explanation; the oddest being when Gilman awakens to find himself at the University with the obligatory Necronomicon laid out before him. While this adds a touch of Lovecraftian continuity the sense of ancient power embodied by Lovecraft’s beings and monsters is entirely absent. The witch collects the souls of dead infants, and is shaping Gilman to perform the sacrifice, but the witch herself is easily overcome and is totally devoid of the ancient pervasive evil of other Lovecraft creations. Oddly for Stuart Gordon he just doesn’t give the episode enough of a Lovecraft feel, and it becomes little more than a haunted house story with a few fantastical flourishes. It isn’t helped by a bland hero, supported by a plethora of equally bland supporting characters. The visual dullness is offset by some gory special effects, but in the end this is incredibly tame and Lovecraft-light. 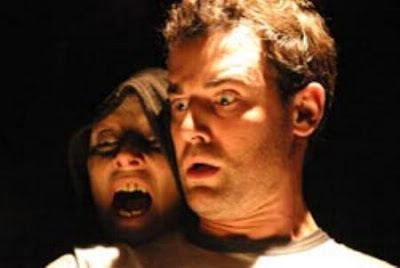 Dreams in the Witch House does pull off one surprise shock when Gilman is unable to save the baby, he is discovered cradling its corpse, and soon finds himself in a padded cell recounting his tale to uncomprehending medics. Although the detectives find much evidence to support his outlandish tale they prefer to forget about it in order to gain a conviction. If Dreams in the Witch House provides anything of value then it is the idea of economics forcing people to make bad decisions. Had Gilman not needed to save money, he would have been able to take a nice room in a nice part of town. Instead his decision to cut costs and corners leads him to becoming a baby killer and dying at the teeth of a very hungry rat with a human face. This was transmitted as the second episode of Masters of Horror and is not far shy of being a total failure. On this evidence we can only hope Stuart Gordon leaves Lovecraft well alone from now on.
© Shaun Anderson 2010
Posted by Shaun Anderson [The Celluloid Highway] at 16:47