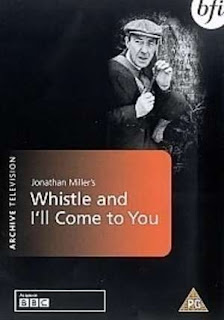 
First published in the masterful 1905 collection Ghost Stories of an Antiquary, the short story Oh Whistle and I’ll Come to You My Lad is easily one of M. R. James’ most disturbing and arresting tales. With his background in the dusty libraries of academia and the enforced introversion of a scholarly way of life James created a series of pompous protagonists whose social skills have been blunted by their obsessions. They are not mere representatives of scientific rationality as you might find in lesser ghost stories, but also men of vanity, pride, hubris and an overriding sense of their own intellectual superiority. This gives them a depth and dimension that makes the inevitable encounter with the forces of the supernatural so much more powerful. In the wake of these chilling episodes with the unknown denial becomes vital to an act of self preservation because there is so much on the line. Not just their own conceptions of reality, but their careers and positions within the esteemed halls of universities; a position that would become untenable without their denial of the events. With this in mind Professor Parkin’s (Michael Horden) repetition of the word ‘no’ at the end of the BBC’s dramatisation of the tale takes on added significance. 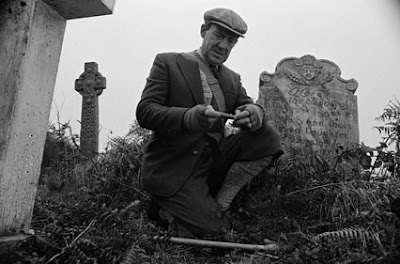 Whistle and I’ll Come To You has often been mistaken for an episode of the BBC’s Ghost Story at Christmas which ran throughout the 1970’s. In fact it was a 1968 episode of their long running arts programme Omnibus. Nevertheless this was without a doubt the inspiration for producer Rosemary Hill and director Lawrence Gordon Clark when they embarked on their annual festive tale of terror. The man behind this particular drama was Jonathan Miller who both directed and wrote the screenplay, and for the latter he should receive the greatest plaudits. This is a very faithful rendering of the original tale, and although the direction only occassionally reaches a level of inspiration, the few dialogue exchanges we have are excellent, and the structure and plotting is perfect for the short 42 minute running time. The genius of the piece lies in the casting of Michael Horden. Fans of British horror will remember Horden as the priest in Demons of the Mind (1972) and as one of the circle of cruel critics in the witty Theatre of Blood (1973). I’ve always thought one of his greatest roles was as the narrator in Stanley Kubrick’s Barry Lyndon (1975) and in Whistle and I’ll Come To You Horden’s vocal delivery plays a major role in establishing his fastidiousness. Professor Parkin is a superb creation; he mumbles to himself, he sings to himself, and suffers from all kinds of fussy mannerisms that have developed unchecked from a life amongst books. 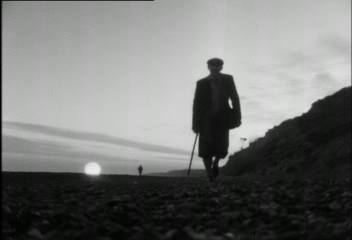 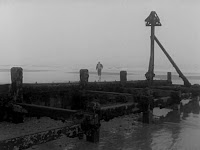 Some might say that the screenplay labours the point of Parkin’s introversion and social ineptitude, but Horden’s performance is such a pleasure that I enjoyed every moment of it. His awkwardness during dinner and breakfast elicits some sympathy, which is then shattered by the patronising manner in which he dismisses the notion of ghosts when discussing the subject with The Colonel (Ambrose Coghill). Parkin has chosen a rather inhospitable and desolate coastal village in Norfolk for his weeks holiday, and his time out from academia consists of trudging through the barren landscape and attending to his own personal scholarly pursuits. One morning he stalks the beach and woodlands and finds himself within an overgrown cemetery, and there he discovers a faded and dirty whistle which he chooses to keep. The first creepy moment comes when after having pocketed the whistle the silhouette of a figure watches his departure on the beach. The fateful encounter with the supernatural that shatters Parkins’ sanity is brought about entirely due to his unswerving belief in the reality of existence and the objects within. An inscription on the whistle warns “who is this, who is coming?”, but Parkins ignores the advice and blows it anyway. This simple act of intellectual rebellion to what he considers an apocryphal inscription sows the seeds of his mental destruction. 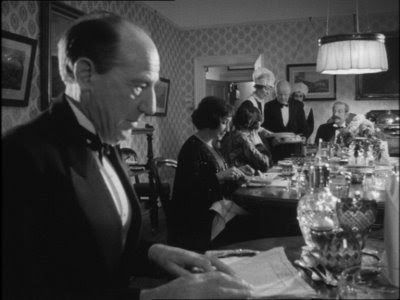 In addition to the superb conception of the central character, the director concocts a number of subtle moments of creeping terror. A dream sequence in which Parkin flees silently from some unknown menace is given added lucidity with the use of slow motion and intermittent creepy sound effects. At night the look on Parkins’ face as he hears something in the room with him communicates not only sheer terror, but the slow unravelling of belief systems built up over decades of stultifying orthodoxy. In these moments the importance of sound has never been so amply illustrated; we hear the sound of something other than Parkin breathing and tossing and turning in the spare bed. The moment of revelation is heightened by the fact that the ghost has no form, and the sight of Parkin moaning in terror and sucking his thumb like a child is powerful for the sympathy it elicits. The black and white cinematography of Dick Bush only adds to the sense of haunting isolation and seclusion. A seclusion created as much by Parkins’ failures in any kind of social environment as it is the desolation of a ghostly stretch of Norfolk coast.