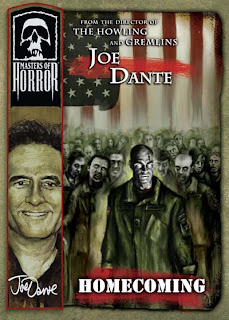 
The majority of episodes that comprise the two seasons of Masters of Horror vanished, in my opinion justifiably, into a cultural limbo that is only navigated by the most hardened of horror veterans. By and large there was little of prominence here, not even the heavily scented whiff of nostalgia - the horror directors of yesteryear continued their depressing plunge into the patchy avenues of mediocrity. However there were two episodes in the first series that did manage to break the shackles of the restricted form and gain unexpected column inches and unexpected praise. A lot of column inches and controversy was reserved for Takashi Miike’s breakout episode Imprint. For those unused to Miike’s grotesque excesses the episode was startling. In my view Takashi Miike was the only director invited to take part in the series that is a true contemporary Master of Horror. Even though he rarely works in the genre, his films are infused with a sense of surreal chaos, of societal breakdown…the only unifying factors being bizarre sexual perversions and brutal violence. The other episode that attracted the attention of the critical mainstream was the Joe Dante contribution Homecoming. I happen too agree with Dante’s assertion that all horror films are political. But traditionally horror has utilised metaphor and allegory, few horror films possess the literalness of Homecoming. It is not open to multiple readings, Homecoming is a liberal/leftist attack on the Bush Jr administration and the illegal war in Iraq that was fought on the back of a lie. 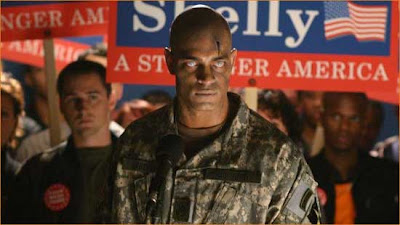 It seems to me that horror enthusiasts aren’t overly keen on direct political statements, instead preferring the obfuscation and symbolic allegory of George A. Romero for example. It should be noted though that the political elements of Romero’s zombie films were first elucidated via the writings of mainstream critics and academics with little interest in the horror genre other than its formal and generic properties. It is always with amusement when I read a gushing defence of Romero’s films from a horror fan using all the old hackneyed socio/political interpretations fed to them by writers who generally despise the genre. Therefore we should be celebrating the multi-faceted nature of horror, a genre that can be used not only allegorically and metaphorically, but literally and directly. In researching this piece however I came across far too many reviews slamming Homecoming for its political directness. Yet I cannot think of a single example of a film made during the Bush Jr administration that is so totally up front in its intensions, and few films so biting in its attack and withering in its satire. The reason that Homecoming wasn’t totally embraced by the horror community says a lot about the cretinous mentality of some horror fans and offers a depressing insight into why horror has become the empty headed (and hearted) landscape of gory carnage it is. The reason it would seem is because the zombies weren’t horrible enough. Because the dead veterans of Homecoming aren’t ripping out intestines, gouging out eyes, and getting their head’s blown apart Homecoming was a lesser work. 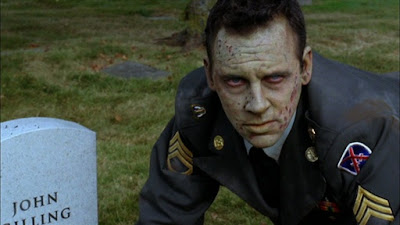 Instead the zombies here are pretty harmless, they haven’t returned to eat the brains of the living, or to fulfil some kind of half assed metaphor, they are back in order to vote out the president that sent them to their deaths on the back of what one presidential publicist describes as “Horseshit and elbow grease”. The teleplay written by Sam Hamm (who also penned the screenplay for 1989’s Batman) and based on the short story Death and Suffrage by Dale Bailey is full of intentionally dislikeable characters whose real life echoes are readily identifiable. The central character David Murch (Jon Tennery) is an adviser to the president and a publicity official for the military, suave and confident he excels at the sound bite and is at home on talk shows. His wish that all the soldiers who have perished in the war could return to tell their parents it was a just cause is soon a reality and is a novel twist on The Monkey’s Paw. He is aided and abetted by Jane Cleaver (Thea Gill) a sexually domineering right wing author and shameful media celebrity and Kurt Rand (Robert Picardo) a puppeteer totally devoid of conscience who seeks to make political capital out of the most morally repulsive situations. This is the territory of caricature, but much of the satire comes from the razor sharp dialogue of these symbolic representations. 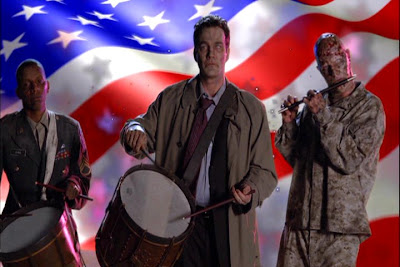 The dead GI’s have returned during a re-election campaign, and after the team have failed to twist the situation in their favour they instead concentrate on rigging the results too ensure the president’s victory. This prompts all the soldiers that ever died in the name of pointless causes to rise up to challenge the injustice. Murch's sub-plot which involves the accidental killing of his Vietnam veteran brother and his subsequent resurrection is perhaps a little too close to Bob Clark’s superb Deathdream (1974), but it affords Tenney the opportunity to atone for his sins. Homecoming is shamefully propagandist and positively revels in its Anti-Bush stance. But it is also generically self aware and full of intertextual references - look out for some of the names on the gravestones as an example. Dante is much more comfortable within a satirical mode, but the question does remain whether Homecoming succeeds as a horror film. I personally think it does, and I appreciated greatly the imaginative use of the zombie as an agent of leftist propaganda.
© Shaun Anderson 2010
Posted by Shaun Anderson [The Celluloid Highway] at 21:06