A Ghost Story for Christmas - The Signalman (1976) 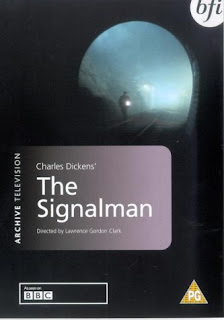 
The 1970’s was a decade of grim austerity for the British film industry, and although the cinemas were bereft of successful home grown product, television screens up and down the land were lit up by some of the most through provoking, intelligent and literate programming Britain has ever witnessed. Fortunately this was a decade of tele-visual innovation and experimentation, and a time when anthology serials reached a position of prominence. One of the most impressive and consistent was the BBC’s annual Ghost Story at Christmas. These chilling and nuanced short films offered a sobering riposte to the merriment of the season, a delicate feeling of unease amongst the decorations and festivities. The series ran from 1971-78 (and was briefly resurrected in 2005 and 2006) and five of the eight tales were based on short stories by M. R. James. These included The Stalls of Barchester (1971), A Warning to the Curious (1972), Lost Hearts (1973), The Treasure of Abbot Thomas (1974) and The Ash Tree (1975). For whatever reason 1976 marked a departure from the world of James with the adaptation of the Charles Dickens’ short story The Signalman. This would continue for the final two episodes - Stigma (1977) and The Ice House (1978), which were based on stories by Clive Exton and John Bowen respectively. 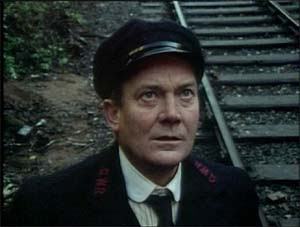 The short stories of Charles Dickens represent an aspect of his literary career that is regularly overlooked, and this particular tale first published in 1866 is one of his most effective and memorable. Dickens was inspired to write it after being involved in an accident on the rails, and this might well explain the anti-modern pulse that beats within the story. The Signalman does not celebrate rail travel and the technological brilliance of engineering feats, but emphasises the risks and dangers of this mode of transport. The rail tunnel becomes a conduit to a fiery hell, and the solitary vigil of the Signalman only adds to a climate of soulless isolation. The adaptation to the screen written by Andrew Davies maintains these qualities and in the main is a faithful rendering of the source material. The programme benefits tremendously from the decision to shoot entirely on location, in this case on a desolate and claustrophobic stretch of the Severn Valley Railway. A filmmaking decision that was maintained through every episode of Ghost Story at Christmas. The mist covered fields that border the cutting enhances the climate of slowly encroaching doom, and the scene is beautifully set for a series of spectral encounters. 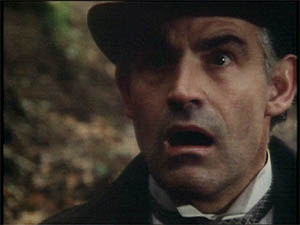 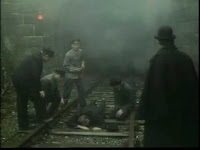 The Signalman switches from the present to the past seamlessly as the title character (Denholm Elliot) recounts too a mysterious traveller (Bernard Lloyd) the ethereal visitation of a ghostly presence prior to tragic events on the line. The first is a tunnel collision, and the second sees a young woman fall from a carriage (though there is a suggestion of her being pushed) to her death on the siding. The agitated state of the signalman is due in no small part to a recent visit from the spectre. He is haunted by the prospect of an upcoming tragedy which he will be powerless to avert. These ghostly premonitions are heralded by the creepy vibration of a bell in the signalman’s hut, an eerie electronic hum which creates much of the tension. The ghost itself is an eyeless white faced apparition, and when we briefly get to see it, it is a gooseflesh inducing moment. Much of the action takes place within the hut, as the signalman and the traveller attempt to make sense of the events. The signalman himself is a lowly but diligent worker, a man of intellectual ambitions, who carries out his duty with precision and loyalty. Nevertheless he is cracking under the pressure of both impending doom and seclusion. The traveller is a far more ambiguous and inscrutable character. His interest in an otherwise unremarkable stretch of railway, and his nightmares suggest an intimate connection with past events. The signalman initially mistakes him for the ghost due to the identical greeting he shouts, but the programme never fully answers these questions. Nevertheless he is still a far more sympathetic and engaging character than the one seen in the short story. 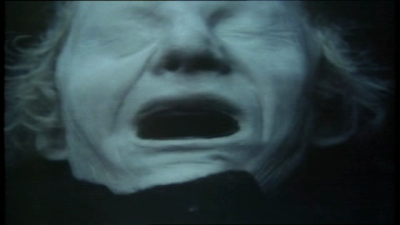 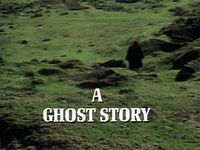 The director Lawrence Gordon Clark utilises his locations with intelligence and economy. There is some excellent cross cutting between the line and the traveller’s dash over the fields at the conclusion, and the nightmare sequence is managed impressively. Clark would direct the majority of the episodes of this series, which did give them a pleasant uniformity, and a consistent style. This is the style of subtlety and nuance, the art of suggestion, a delicately balanced narrative in which a single sound effect can plunge one into terror; and the sound design here is excellent. The technical restraint of the production is alleviated by two great acting performances; Elliot is suitably flaky as the signalman, he is furtive and twitchy, his eyes haunted by the impossible responsibility resting on his shoulders. Lloyd is an amiable and compassionate traveller, and encourages the signalman to relieve his burden. It's fairly clear that the traveller doesn’t believe a word of it, but he doesn’t slip into the position of being mocking sceptic. Of the episodes of Ghost Story at Christmas I have viewed The Signalman is without doubt the most impressive and is a terrifying obscurity well worth seeking out. It was released on DVD in the UK by the British Film Institute in late 2002, but has long been deleted, and unfortunately now fetches large sums.