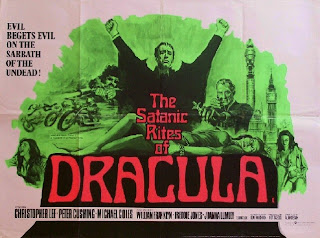 aka:
Count Dracula and his Vampire Bride

Dracula Is Alive and Well and Living in London


The Satanic Rites of Dracula was Hammer’s seventh outing for the cape wearing fiend Count Dracula, and the last to feature Christopher Lee in the role. The Count would appear for one final time in a Hammer film in 1974 when John Forbes-Robertson put in the fangs for The Legend of the 7 Golden Vampires. This particular entry is a direct sequel to the risible cinematic disaster Dracula A. D. 1972 (1972), and I’m relieved to say is a vast improvement on that embarrassing offal. In the main the same team were retained from A.D. 1972, with Alan Gibson directing and Don Houghton writing the screenplay. It beggars belief that they were given a second chance, but fortunately this time the filmmakers manage to concoct an enjoyable and tightly paced film. However as a finale to Hammer’s series of Dracula films it is something of a feeble and half-hearted whimper and does not bear any kind of comparison to some of the earlier films. The producers were clearly determined at this point to make Count Dracula succeed in a contemporary setting, and in large part here they do well. The failure of A. D. 1972 is that Dracula is not allowed too engage with modernity and spends the whole of the film within the gothic walls of a deconsecrated church. In Satanic Rites, Dracula has utilised capitalism and property development in order to create a smokescreen in front of his real identity. He has acquired the resources and influence in order to put forward a more coherent plan of vengeance, and is able to manipulate greed and avarice to control those disciples he needs to carry out his plan. In many ways Dracula is more like a Bond villain here, and although the character features little in the running time, he is still given far more than in the previous entry. 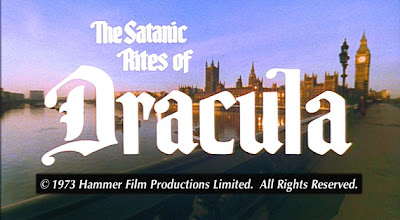 The film opens unpromisingly with a rather pathetic satanic ritual (an aspect of the plot that is largely overlooked, but included in order to take advantage of a vogue in films dealing with Satanic themes at the time), and introduces representatives from the British Secret Service. This is obviously a department suffering from government cutbacks, we glimpse a total of three members of staff, operating out of a sparse office. The country estate Pelham House where the ritual takes place has been under surveillance and the spies have happened upon a major conspiracy which could have a devastating affect on the fabric of British society. The patriarchs who lick their slavering lips at the sight of a nude babe being sacrificed include high ranking representatives of the government and the military, an expert in biology, and a powerful property magnate. The ritual is presided over by a mysterious Chinese woman, all bitches to the nightmarish figure that lurks in the background and goes under the name D. D. Denham. One leftover from A. D. 1972 that makes a welcome return is the Scotland Yard flatfoot Inspector Murray (Michael Coles) who is drafted in to work in conjunction with Torrence (William Franklyn) of the Secret Service. It isn’t long before Murray is calling upon that cadaverous expert in the esoteric Van Helsing. 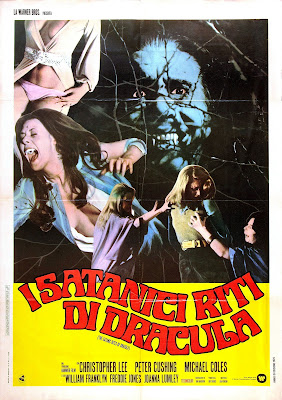 These moments of static dialogue delivery (lightened of course by the magnificent and dignified presence of Peter Cushing) are punctuated by one or two moments of well mounted action. Much of it is generated by Afghan clad bikers, nattily attired thugs who are also pretty good snipers. Where Count Dracula recruited these goons from is unclear, but this is another indicator of The Count embracing a variety of avenues too achieve his nefarious aims. In addition to the chase scenes, there are several good fights, and a particular highlight is an encounter in the cellar of Pelham house between the forces of good and hot vampire women, whose power is somewhat diminished by the chains that bind them to walls or coffins. The best moment of the film however comes when Van Helsing arranges a meeting with Denham on the site of the old church where Dracula perished in the last adventure. On this occasion the Howard Hughes type recluse Denham is more than happy to grant an audience, little knowing his guest has come armed with a silver bullet. It turns out that Dracula plans to destroy humanity with a new and virulent strain of the plague developed by one of his cohorts Dr. Julian Keeley (a typically flaky turn by Freddie Jones). But not before he has allowed Van Helsing to watch impotently as he makes Jessica his vampire bride. 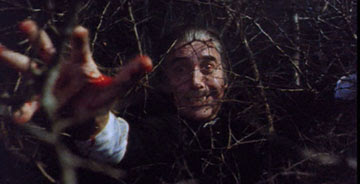 I was never all that keen on long walks in the countryside!
﻿

The whole thing ends with a predictable conflagration at Pelham House, and a very controversial demise for Dracula which sees him cut to ribbons by a Hawthorne bush before being staked through the heart. Fans have always been highly dissatisfied with this conclusion, and also no doubt the manner in which the vampire women are despatched. In fact they have generally been highly dissatisfied with this film as a whole, but conceptually the film holds together remarkably well. The espionage elements of the plot are novel, Dracula does adapt rather well to the modern world, the themes of biological warfare, corruption at the heart of government and big business, and the ease with which The Count can manipulate the vanity of man and shape it too his own ends gives the production a unique flavour. My major criticism however is that this is perhaps the most visually bland Dracula film of them all, and the soundtrack by John Cacavas is equally staid and unmemorable. Within the environs of its own running time, this is a solid and enjoyable variation on a theme, as the final Dracula film produced by Hammer it is underwhelming to say the least.
The Celluloid Highway's 150th Film Review