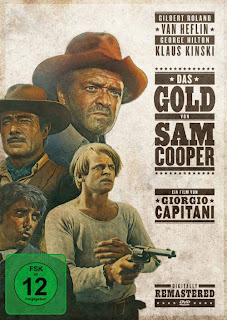 AKA:
Chacun Pour Soi
Every Man for Himself
Sam Cooper's Gold
The Goldseekers


It’s always a pleasure to discover a hidden gem, but unfortunately it is an increasingly rare occurrence nowadays. This is especially so in a cycle as dense and derivative as the Euro-Western. But my interest in the Euro-Western was recently piqued again by the purchase of an excellent book called Any Gun Can Play, written by Kevin Grant, and published by FAB Press in 2011. If hidden cinematic gems are rare, then well written books on film are like goldust. The Ruthless Four (one of many titles it was released under) is one such discovery, and the analogy with gold is appropriate, for the film charts the damaging and corrosive effect, this particular precious metal can have on human beings. There are certain themes and concerns that are endemic in the Euro Western, and one theme this cycle returns to time and again is greed. This theme is of course also present in both traditional American westerns, and the revisionist westerns that followed in the wake of A Fistful of Dollars (1964). But the difference lies in the way that this theme is presented. The traditional western always seeks to emphasise the positive aspects of its principal themes, and greed exists as part of a cross-current of themes that ultimately serve a redemptive plot. In many European examples greed is the entire raison d’être of the film, with screenplays often allowing no room for anything else, as they explore its acidic effect.

To those familiar with the work of Fernando Di Leo, both written and directed, the nihilism of The Ruthless Four will come as no surprise. Di Leo’s outlook was particularly suited to this cycle, and here he collaborates with Augusto Caminito on a screenplay that leaves no room for redemption or happiness. If The Ruthless Four can be said to have an authorial voice, then it almost certainly belongs to Di Leo. The first choice director was apparently Lucio Fulci, which suggests this film might have been seen as a companion piece to the earlier Di Leo scripted and Fulci directed Massacre Time (1966). For whatever reason Fulci did not get the gig and the reins were instead handed to the workmanlike Giorgio Capitani, who had no experience in the genre. This is not necessarily a bad thing though. Capitani at no point seeks to draw attention to his role in the proceedings, the direction is solid and unobtrusive, and on no occasion resorts to empty stylistics or flashy techniques. This film, from a technical point of view, has a traditional and stately feel, which seems perfectly in keeping with the intimate character study that it is. It is highly unlikely this would have been the case had Fulci helmed the picture. The downside to this is that at times The Ruthless Four feels pedestrian and sedentary, the screenplay is dialogue heavy, and at times the director seems clueless when it comes to creating a sense of pace.

If a film has lots of dialogue and an emphasis on characterisation then there subsequently becomes a necessity for strong performers, and this is where The Ruthless Four is strong. The film was a West German/Italian co-production and all bases are covered with the presence of Van Heflin, Gilbert Roland, Klaus Kinski and George Hilton. Van Heflin plays Sam Cooper who is the ostensible lead of the piece, a typical Euro-Western anti-hero who manages to be incredibly sympathetic despite also displaying the ruthlessness of a killer. With his weather beaten face, and world weary expression, Heflin is excellent as the dreamer who has spent decades searching for gold, only to have betrayal and violence shatter the experience, when he finally does strike it rich. Cooper is also a man with a burden of guilt, a hard drinker, with a streak of cynicism a mile wide, his inability to trust in man particularly problematic as he needs assistance to bring the gold back. Nevertheless despite a myriad of flaws Cooper is the moral compass around which the film flows, and remains a likeable and understanding figure throughout.

His three companions add a multitude of ambiguous layers to the proceedings; Hilton is perhaps the only actor that doesn’t quite pull it off. He is in esteemed company here, and his character is the least interesting...despite the homosexual subtext that is clearly present between Manolo and The Blonde played by Klaus Kinski. The Blonde is a domineering sadistic psychopath, bloodthirsty and avaricious, at all times he is seeking an advantage. Kinski has a more substantial role here, and he excels with his furtive glances, sardonic facial expressions, and calculating demeanour. When we first see him he strikes an imposing figure bedecked in the clothes of a priest and wearing sunglasses. Manolo by contrast is submissive, weak and rather pathetic, so perhaps we can allow Hilton some leeway for having one of the more thankless roles. The final member of the quartet is Mason played by Gilbert Roland, a former war time colleague of Cooper, who believes Cooper betrayed him and is responsible for the malaria he now suffers from, after years toiling in the swamps of Florida.

The grist of the plot is the interactions between these four characters as they travel the inhospitable landscape to the mine that Cooper prays remains unmolested. Although the film owes an obvious debt to The Treasure of the Sierra Madre, it has an existential angst all of its own. The gritty desert landscape, the harsh and unforgiving sun, but also the purging rainfalls indicates the centrality that weather plays in the proceedings; this is brought vividly to life by the cinematography of Sergio D’Offizi.  Overall the picture is very light on action, but when it does come, such as when the quartet faces an ambush at a deserted mission, it is efficient and assured. Often in these films any shortcomings are more than made up for by an outstanding soundtrack, but on this occasion the musical contribution of Carlo Rustichelli does little to complement the on screen action, or alleviate the leaden exposition; though at times it does give the film an epic grandeur far in excess of its simple premise. In lesser hands the material might have become a real trudge, a depressing odyssey of greed with only doom and disaster a possible outcome. But the lively performances, and the rigorous way in which the film sticks to its guns, so to speak, maintains a level of interest throughout.