American filmmaker John Carpenter built his reputation in the 1970’s with a series of innovative and in part socially committed genre films. At one time Carpenter had a particular gift in constructing genre films that combined affection and enthusiasm for generic history and innovation and newness for contemporary audiences. After successfully tackling science fiction through the lens of the counter culture in Dark Star (1974) and the western through the lens of contemporary racial tensions and urban disintegration in Assault on Precinct 13 (1976) Carpenter inevitably turned his attention to the horror genre. Halloween popularised the slasher and ‘body count’ horror seen in earlier trend setting examples like Psycho (1960), the absurdity and brilliance of Mario Bava’s cynical Bay of Blood (1971) and Bob Clark’s festive chiller Black Christmas (1974). Halloween polarised independent filmmakers to follow suit and by 1980 the major Hollywood studios had got in on the mass slaughter act with such derivative films as Friday the 13th (1980). The importance and success of Halloween was to gel a multitude of influences and tap into a particular virulent fear in American society.

Halloween works perfectly as an exercise in cinematic scares due to an inspired symbiosis of three key aspects of filmmaking. The first of these is the manner in which Carpenter and his DOP Dean Cundey utilise the frame. A delicate and subtle lighting scheme is enhanced by brief glimpses of the enigmatic psychopath Michael Myers. Despite the films ultra low budget the filmmakers make excellent use of the widescreen image and to watch the film with an accurate aspect ratio is critical. The attention to camera position and the composition within the frame creates a suspense and uncertainty that is rarely achieved in the horror genre. We are never entirely sure from which part of the screen the crazed Myers will leap next. The second aspect is a sparse and minimalist soundtrack composed by Carpenter himself. The atonal use of synthesisers creates tension, and the haunting main theme acts as a leitmotif for Myers. Part of the strength of a leitmotif is its ability to deceive the audience. By associating this piece of music so strongly with the violence of Michael Myers we come to expect his appearance every time it plays. It constantly reminds us of the omniscience of Myers, and is used on one or two occassions as a red herring, creating suspense and then shattering the tension with a non Myers pay off. In the case of Halloween musical repetition creates and sustains suspense rather than the opposite. The third key element is a series of believable and committed performances - performances extremely rare for low budget independent cinema. Donald Pleasence is excellent as Dr. Loomis - an expert given to biblical proclamations of doom, who ends the film as disturbed and unhinged as the psychopath he is hunting. This is offset by the quiet subtlety and resourcefulness of Jamie Lee Curtis as the innocent Laurie Strode.

But what truly separates Halloween from the mindless trash that followed in its wake is that it also takes time to develop a radical subtext. The manner in which it challenges ideologically precious institutions places it firmly within the radicalised political strain of horror that was very visible in the 1970’s. In the film small town America becomes a dangerous haven of hypocrisy and selective amnesia. The terrible crimes of the infant Myers are hushed up and pass beyond the memory of the townsfolk and into the realm of myth and urban legend. The Myers’ house becomes a monument blurred by the passing of time and the danger it represented has passed into legend. The only fear it holds is for those children dared by their peers to enter as a challenge of courage. The suggestion is that the citizens of small town America have a skill for repression. 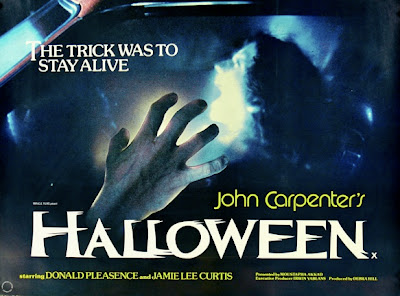 The science of psychology is reduced to religious platitudes. Its custodian in this case is Dr. Loomis who uses anything but science to explain away the behaviour of Michael Myers. Haddonfield is infiltrated with ease by a monster because the forces of law are incompetent and virtually non-existent. Myers is able to murder the town’s children with little or no molestation by a police force unwilling to believe he has come home. Myers is so successful at terrorising and murdering the children of Haddonfield because this is effectively a world without parents. This is a society in which the forces of patriarchy are unable to challenge the monsters in its midst. Instead the responsibility lies with an intellectual and resourceful matriarchal presence. But put all these sociological/political and cultural concerns to one side because Halloween is first and foremost a damn good scare and a landmark in the horror genre.
﻿© Shaun Anderson 2010
Posted by Shaun Anderson [The Celluloid Highway] at 16:03