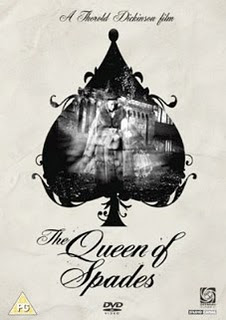 
The Queen of Spades is a remarkable film made all the more astonishing by the fact that its director Thorold Dickinson began work on it with just five days notice. At this point Dickinson was best known for Gaslight (1940) and he would only make nine films in a career plagued by interference and bad luck. He is perhaps more prominent now for his contributions to the academic study of film. Especially important in a British culture which has been dismissive of film as an art form and dedicated itself to the type of social realism that Dickinson gleefully ignores in this particular film. Instead The Queen of Spades belongs to a sensual and highly melodramatic tradition in British cinema of which the films of Michael Powell and Emeric Pressburger belong. The supernatural element of the narrative gives it a weak claim to horror status, but Dickinson astutely avoids the visual iconography of the genre, preferring instead to concentrate on the atmosphere and visual panorama of the piece. When once places the film into its post World War Two British cinema context it emerges as a very distinctive, poetic, and highly artistic effort whose critical and commercial marginalisation was no doubt due to its lack of social impetus. 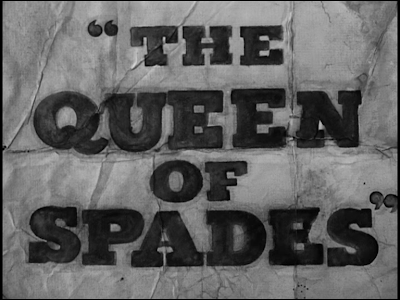 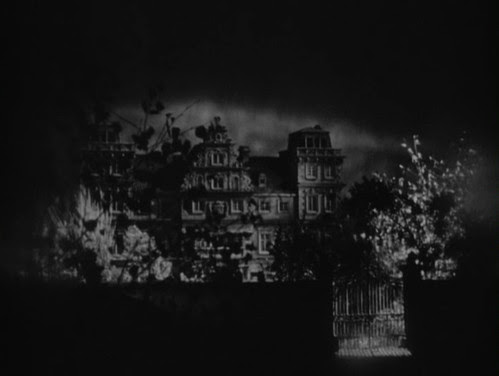 The film is anchored by an astonishing and intense central performance by Anton Walbrook. He plays the character of Herman Suvorin who is an engineers captain in the Russian army. He is unable to join his wealthy aristocratic comrades in their nightly gambling sessions due to his class status, and instead must simmer on the outskirts, and content himself with a life of non-acceptance. Suvorin’s alienation is both physical and mental and in the tormented performance of Walbrook it comes as no surprise that he is open to changing his lot through supernatural means. When he discovers that the aged Countess Ranevskaya (Edith Evans) long ago made a pact with the devil for the secret to the card game, he plans to relieve her of the secret and thinks of nothing in manipulating who he can to achieve his aims. Despite its setting in 1806 St. Petersburg the class concerns of this tale are totally in keeping with British cinema, but the sumptuous art direction by William Kellner and the wonderful costumes of Oliver Messel push the film into an historical netherworld, a disturbed anytime in which the universal message of a Faustian pact brings yet another avaricious man to ruin. 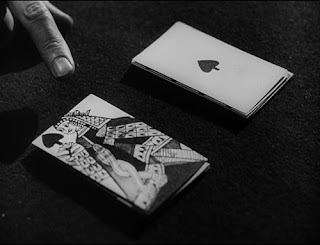 Dickinson creates much of the films legendary atmosphere through expressionistic lighting techniques - contrasting with great success light and dark, and making the shadows seem alive with pregnant menace. This is complemented by some odd camera angles that only add to a sense of impending doom as the supernatural aspects of the narrative begin to increase. A sequence in which Suvorin’s confusion and mental breakdown are represented by a multitude of superimposed eyes directly quotes from Fritz Lang’s Metropolis (1927). And at times The Queen of Spades has an audacious technical complexity which puts it on a par with the work of Lang. The sound design for example is particularly noteworthy - especially the merest sounds (such as the swishing of the Countess’ spectral robes) represent a ghostly presence. We don’t actually see the ghost of the Countess which offers the tantalising possibility that we are witnessing the fevered workings of Suvorin’s mind (this is supported by an outstanding funeral scene in which the dead Countess snaps open her eyes). Either way Dickinson and his collaborators create subtle scares that linger long in the memory due to the beautiful monochrome photography c of Otto Heller and an innovative attitude to sound design.

The film might be criticised by historical purists for perceived innaccuracies but this is too entirely miss the point. This just happens to be set in 19th century Russia because that is when the short story is set. This is a tale for the ages whose essential message remains a pertinent warning for us all. All filmmaking elements work to create a fantastical Russia of snow swept landscapes, gothic bedrooms and bawdy gypsy taverns. The ghostly visitations are almost an afterthought, with a plot that is also of secondary importance that only half heartedly offers us the stock characters and situations of commercial filmmaking. This is a genuine example of British art cinema, over a decade before the coalition of Free Cinema and the kitchen sink misery of the ‘British New Wave’.
﻿© Shaun Anderson 2010
Posted by Shaun Anderson [The Celluloid Highway] at 13:52