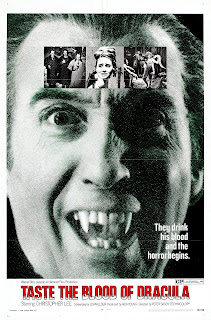 
Taste the Blood of Dracula was Hammer Film Productions’ fifth film to feature Transylvania’s favourite son, and the fourth to feature the sartorial talents of Christopher Lee as the eponymous bloodsucker. I’ve always had a great fondness for this Hammer film, and in comparison to the other Dracula pictures produced by Hammer I rate this as second only to their 1958 production. By this point Bray Studios was a distant memory and much of the studio bound sequences seen here were shot at Elstree Studios. Later Hammer films had a cheap tackiness about them, but Taste the Blood…was one of the last to maintain a lushness and vitality, a visual presentation that far exceeded its modest budget. The film benefits tremendously from some impressive location work in the Hertfordshire countryside, and several exciting and stylish scenes mounted in Highgate Cemetery. Just a scant few months after the release of this film, Hammer put out their sixth Dracula film Scars of Dracula, and the aesthetic difference between the two films is incredible. In many ways this was the last great gothic horror film produced by Hammer, and distilled with economy and brilliance the class message that is visible throughout their films. 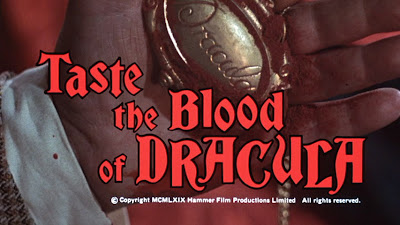 The presence of Count Dracula in this film is cursory and purely symbolic. The character adds little to the plot, and much of the narrative is propelled, initially at least, by events out of his control. This is largely due to the fact that the original conception of Anthony Hinds’ screenplay didn’t feature Dracula at all. Instead the film was set to concentrate on the character of Lord Courtley played by Ralph Bates, whom Hammer were pushing to be their next big star. However pressure from Warner Bros forced Hammer to once again seek out the aid of the disillusioned Christopher Lee. The hasty rewrites that were undoubtedly undertaken are visible on screen; Dracula merely glowers from the sidelines and occasionally commentates on the progress of his revenge. Instead the focus of Hinds’ screenplay is a trio of Victorian gentleman; the strict disciplinarian William Hargood (Geoffrey Keen), the feckless and slimy Samuel Paxton (Peter Sallis) and the more sympathetic Jonathan Secker (John Carson). They represent the pillars of a small Victorian community, and are so benevolent that they give up one day every month to travel to the squalid slums of London to perform charitable work. This is a front for an evening of whoring, drinking, and other lust filled activities. The hypocrisy of these gentlemen drips from every one of their sinful utterances, and inevitably their tastes take a more esoteric turn when they encounter Lord Courtley and his interest in black magic rituals. This involves supping the blood of Dracula, evidently the taste isn’t to their liking, and they offer thanks to Courtley by battering him to death. 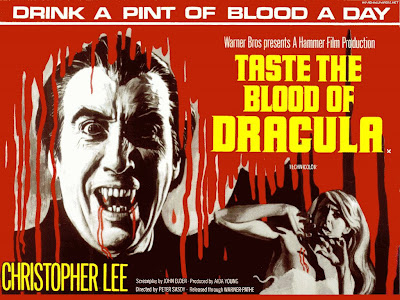 Dracula’s motivation is revenge for the brutal murder of the disciple willing to perform the necessary tasks to resurrect him. His methodology rests upon punishing the children for the sins of their fathers. For Hargood the sexualisation of his daughter Alice (Linda Hayden) is intolerable, and he responds with a violence that is disturbing in its eagerness. Dracula is an arch manipulator here, and its notable that none of the fathers actually encounter Dracula face to face. They are brought to destruction by their own hypocrisy and the children that have unduly suffered as a result. This thinly veiled attack on the class system is both original and highly effective and succeeds in large part due to the excellent performances from the trio of vile patriarchs. Their children played by Linda Hayden, Anthony Higgins, and Martin Jarvis are considerably less engaging, and if the film lacks anything then it is the type of savant character that Peter Cushing excelled at. Ralph Bates is both charming and mysterious as the aristocrat determined to see his vampire master walk the earth again. His confidence and domination of the sinful fathers is further evidence that this is a Victorian world of strong patriarchal and masculine forces; his death robs the film of an enigmatic and interesting character. Although he has little to do Christopher Lee’s charisma bolsters the film and is naturally vital to the set piece climax that ends the film. This is an unusually well cast Hammer film, and this aids believability immeasurably. 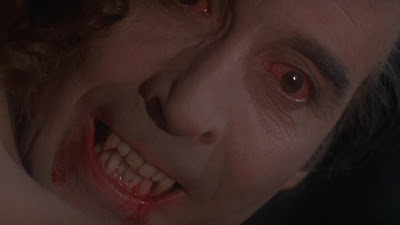 Hungarian born director Peter Sasdy who was making his feature film debut does an excellent job. The film has an ambitious visual style and Sasdy clearly has a talent for mounting suspenseful sequences. On the strength of this display Sasdy would go on to direct Countess Dracula (1971) and Hands of the Ripper (1972) for Hammer, and Doomwatch (1972) for Tigon, but arguably achieved his greatest creative success with the BBC adaptation of Nigel Kneale’s The Stone Tape (1972). The production design of Scott MacGregor is likewise impressive; the bawdy whorehouses with their tired and tacky exoticism adds to the decadence and disgust at the fathers’ disgraceful behaviour. MacGregor also worked on Scars of Dracula which looks as though it was designed by a blind man, and illustrates the damaging effect of the diminishing returns which affected Hammer so rapidly in 1970. Taste the Blood of Dracula is easily one of the most enjoyable and entertaining of Hammer’s vampire films and holds a special place in my heart thanks to the triumvirate of Victorian hypocrites.
© Shaun Anderson 2010
Posted by Shaun Anderson [The Celluloid Highway] at 22:41