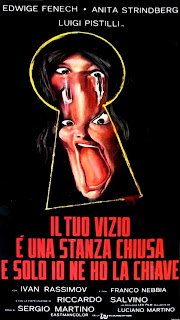 AKA:
Excite Me
Eyes of the Black Cat
Gently Before She Dies


Your Vice is a Locked Room and Only I Have the Key (it’s a bit of mouthful, but still an awesome title) was Italian filmmaker Sergio Martino’s fourth attempt to concoct excitement and entertainment within the highly stylised environs of the giallo. His previous three The Strange Vice of Mrs. Wardh (1971), The Case of the Scorpion’s Tail (1971), and All the Colours of the Dark (1972) showed a filmmaker willing to develop and expand upon the conventions he was working in. The Strange Vice of Mrs. Wardh wore its influences a little too noticeably, but was still a confident first effort. The Case of the Scorpion’s Tail offered refinement, and was a solid progression on the previous film, if still somewhat overshadowed by its mimicry of others. The culmination of Martino’s vision came in All the Colours of the Dark; his first giallo to stand firmly on its own two legs, show some innovation, and offer the possibility of a unique brand of gialli with the indelible stamp of Martino’s personality. With this in mind Your Vice…has to be considered something of a retrograde step, and while some may cite the films cross pollination of gothic modes of address within the form of the giallo as evidence of innovation, one only need look to the marvellously baroque The Night Evelyn Came out of the Grave (1971), which appeared a year before Martino’s film, and is far superior on almost every level. 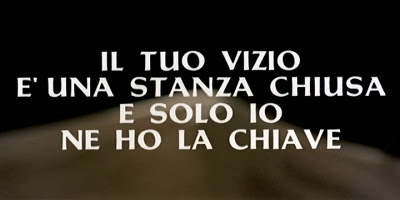 The film opens with an embarrassingly dated scene of debauchery at the crumbling villa of faded writer Oliviero Rouvigny (Luigi Pistilli). Rouvigny is decadence personified, a self indulgent drunk, carrying the weight of a bloated ego, and a morbid obsession with a dead mother that glowers down at him from a family portrait. His degeneracy extends to opening up his rotting mausoleum of a house to a nearby hippy commune, and humiliating his shrewish wife Irene (Anita Strindberg) in front of all and sundry. He has even acquired the services of a black maid purely as a status symbol, and is not beyond racial belittlement. If the humiliation of Irene in front of a bunch of hippy louts isn’t enough, he later rapes her. Much of his rage and sense of inadequacy comes from the fact that he can’t get it up unless the source of his lust is wearing his dead mother’s old dress…the disturbing implications of this need no further elucidation from me. Oliviero is a fantastic creation, and one brought to grotesque life by an inspired Pistilli, who is given an all too rare opportunity to shine as a total sleaze. Working in parallel to the fragmenting sado-masochistic marriage of the Rouvigny’s is a series of vicious murders by a sickle wielding maniac, the most impressive of which takes place in a whore’s bedroom; a room filled to overflowing with an uncanny collection of dolls that gaze upon the violence with lifeless implacability. Oliviero’s furtive and secretive behaviour does enough to raise the suspicions of his wife, though veterans of the form will quickly conclude he is a red herring. 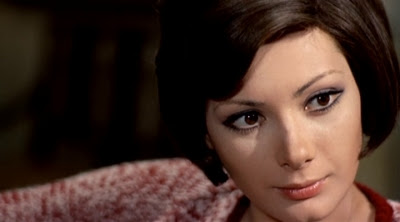 In fact in a plot development borrowed from Martino’s earlier giallo The Strange Vice of Mrs. Wardh the murders themselves are also a red herring. But it enables another killer the opportunity to utilise them to mask their own misdeeds - a plot point later borrowed by Dario Argento in Tenebre (1982). One has to commend Ernesto Gastaldi, Adriano Bolzoni and Sauro Scavolini for a screenplay more concerned with characterisation, motivation, neuroses and psychology. This is reflected in the direction from Mr. Martino whose camera is more anxious to prowl around the mouldering villa, which in the best tradition of Poe works as a metaphor for the nauseating iniquities of the vile human beings that dwell within its walls. Irene not only has to contend with her husband but also the pet cat Satan, and the manner in which the cat torments her, most notably by attacking her beloved pet doves, offers a glaringly obvious clue as to Irene’s true role within proceedings. Anyone who has read Poe’s The Black Cat will know that the eponymous creature represents the narrator’s guilty conscience, and the subsequent way in which Poe’s tale is grafted into the plot, dramatically reduces the twist that comes towards the end. One’s enjoyment of this film would actually benefit from not being familiar with the Poe story. 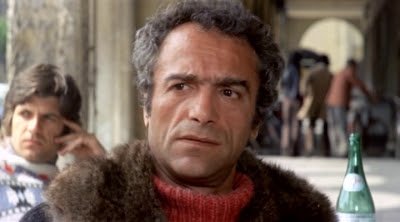 Edwige Fenech pops up halfway through the narrative as the precocious prick teasing niece of Oliviero. Fenech enjoys an all too rare opportunity to play a duplicitous bitch, one that worms her way into the sexual affections of both Oliviero and Irene. Any film in which Miss Fenech and Miss Strindberg get it on is okay in my book! I must admit I enjoyed Fenech’s cool confidence and unbridled arrogance, and she is significantly less bland in this outing. She effortlessly plays on Oliviero’s lack of control, and in addition to rape and implied necrophilia, good old Oliviero can add incest to his list of perverse credentials. Also lurking in the shadows is the silver haired Ivan Rassimov, always an engaging screen presence until he opens his mouth; here Rassimov is used sparingly and rather effectively. Perhaps the most unconventional aspect of this film is that it lacks the narrative thread of amateur detection, indeed the detective element of the plot is almost non-existent, and largely the film remains in the highly subjective and interiorised world of the villa. When it does step outside this milieu, for example when Floriana attends a dirt bike rally, the scenes seem unnecessary and tacked on. For all of its shortcomings (and I have to say I don’t agree at all with the general consensus that this is a highly unconventional, form breaking giallo) this is still a supremely confident and, perhaps most importantly of all, entertaining film, from a filmmaker long overdue his fair share of recognition.