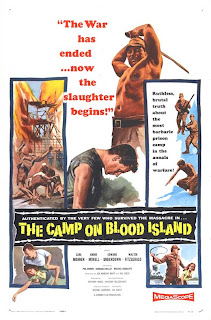 
The Camp on Blood Island is one of those Hammer obscurities that I’ve wanted to watch for a long time. Fortunately, and thanks to Sony Pictures, the film made its UK DVD debut in October (along with a rash of other Hammer films that were distributed by Columbia Pictures) and can now be enjoyed in an excellent presentation which retains the original Megascope aspect ratio of 2.35:1. One thing that Megascope does achieve is an impressive depth of field which in just a few shots gives us a sense of the large number of extras used by Hammer to populate their Japanese POW camp. The director Val Guest is able to use this broad compositional palette to powerful effect, emphasising both the isolation and hopelessness of the men, and in mounting several harrowing sequences which deal out death from a sobering distance. This is an expansive film which makes tremendous use of the Surrey countryside, and the studios at Bray, to concoct a heady tropical nightmare of imprisonment and desperation. 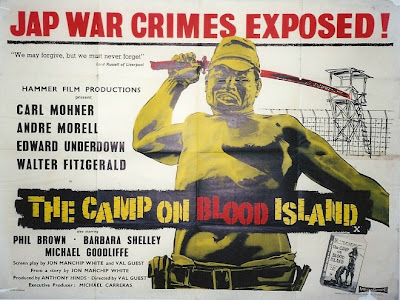 Val Guest is a director who has received sparse attention from scholars, but in the 1950’s he directed and wrote many films for Hammer. Unlike Terence Fisher, Guest was able to leap easily from genre to genre, but for me Guest is at his best when dealing with gritty and realistic material. He is a filmmaker who worked particularly well with black and white, and much of the resonance and reality of this film is evoked through the beautiful monochrome cinematography of Jack Asher. It gives the film a sense of immediacy and a brightness which indicates the brutal toll of a blazing sun. The film sets its stall out instantly with an opening sequence which sees an under nourished man digging what turns out to be his own grave. He is despatched with the wave of a hand in a cruelly economical fashion in front of the watching prisoners. The Japanese are coldly logical in the manner in which they deal out punishments, but this cool logic is sometimes betrayed by a need to mock and humiliate. The indignities visited upon the diplomat Beattie (Walter Fitzgerald) illustrate a desire on the Japanese part to reduce figures of respect and authority to animals. 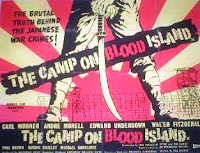 Some audiences may have problems with the depiction of the Japanese, who are unremittingly cruel and sadistic. This includes a horrible scene in which a plea for more bandages is rewarded with the bloody and tatty bandages of the man shot at the start of the film. The screenplay written by J. M. White and Val Guest makes no attempt to humanise the Japanese, they are merely devices of subjugation and domination. Instead the film is totally preoccupied with the valour, courage and determination of the British soldiers, who are led by Colonel Lambert (André Morell). The film at this point is a series of sadistic episodes in punishment of Lambert’s risky and illogical orders to disable all radio communications. But Guest pulls out an excellent plot twist, Lambert has discovered (the film is unclear as to how) that the allied forces have defeated the Japanese and won the war. Their jubilation is somewhat tempered however by the fact that Commander Yamamitsu (Ronald Radd) has promised to massacre every man in the camp, and also the women and children of the neighbouring camp if Japan lose the war. This instantly increases the tension and leads to some marvellously suspenseful moments in which lives are risked to disable communications.

The suspense that Guest generates - which includes the arrival of a gung ho American soldier who just manages to keep the news to himself, but must endure a whipping for his silence, helps to offset the flagrant and unthinking racism of the film. It is unfair to dismiss the film on these grounds, because the psychotic malevolence of the Japanese creates much of the films enjoyment. They are evil on almost biblical terms and much humour is added by Hammer’s casting decisions. The chief villain Yamamitsu is played by Durham born actor Ronald Radd, his second in command Sakamura is played by Indian born Marne Maitland, but the best is yet to come…look out for Michael Ripper as a jovial Japanese driver! His joy and amusement on having learned that Japan have lost the war is quite perplexing! A series of subplots involving plans to escape seem like padding the film could have done without and Barbara Shelley as the films moral conscious Kate Keiller is badly underused. The film predictably concludes with a protracted (but highly entertaining) battle, and an unfair burden for the enigmatic Lambert. The Camp on Blood Island caused something of a stir on its release, and was memorable enough for Hammer to produce a sequel of sorts called The Secret of Blood Island in 1964. This is a powerful and at times harrowing POW drama marked by a briskness of pace and a surprising lack of sentimentality.
Posted by Shaun Anderson [The Celluloid Highway] at 14:59