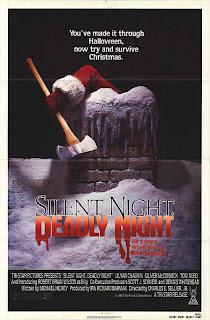 
I half considered waiting until Christmas Eve to post this particular review, but that would have been far too predictable. I’ll probably review Halloween (1978) on Christmas Eve instead. Speaking of which, when John Carpenter and Debra Hill elected to set their sub Psycho (1960) derivation around Halloween, there was almost an instant inevitability about a film like Silent Night, Deadly Night. This wasn’t the first Christmas themed slasher film though, that dubious honour goes to You Better Watch Out (1980 aka Christmas Evil - and it is as dreadful as it sounds!). It made the festive themed episode of Tales from the Crypt (1972) with Joan Collins look like a masterpiece…its quite surprising to think that this 20 minute Amicus segment still remains the gold standard of Christmas horror. Lobotomised audiences had also queued up for Prom Night (1980/2008), Mother’s Day (1980), New Years Evil (1980) Graduation Day (1981) and My Bloody Valentine (1981/2009), before Silent Night, Deadly Night appropriated the image of Santa Claus and subverted him into a homicidal maniac gleefully slashing and hacking through another troupè of badly cast stereotypes. Although the festive season was a major feature of Bob Clark’s Canadian chiller Black Christmas (1974), the films overall sense of irony and intelligence puts it in a very exclusive club of ‘slasher’ films that are actually any good (by my reckoning this club has less then ten members). Instead of dealing in irony SNDN deals in hard edged cynicism, and it is this pessimistic attitude to the festive season that has aided its continued prominence. 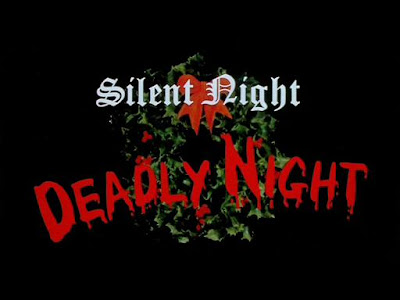 A number of major producers leapt cheerfully onto the ’slasher’ bandwagon due to the success Paramount Pictures had with the Friday the 13th series. This film was Tristar’s response, however unlike Paramount, Tristar simply didn’t have the balls to defend their investment when a lot of bored housewives and feminist pressure groups decided they had nothing better to do than picket the screenings. Due to the backing of Tristar the film had a low, but reasonable, budget of $750,000, and it has a visual presentation far superior to many of its contemporaries. The premise was also strong enough to tempt the highly competent producer/director Charles E. Sellier Jr (creator of the super bearded Grizzly Adams) to helm it. Sellier brings with him the assurance of many years in the business, and on occasion even provides some inspirational and innovative moments. I’m talking of course of the films keynote antler impalement sequence which is brought vividly to life by DOP Henning Schellerup and the special make up effects of Rick Josephson. The film was based on the novel Slayride by Paul Caimi (sadly I haven’t had the pleasure!) and with a screenplay by Michael Hickey, and to his credit Hickey does try to create some background and depth to the proceedings. The attempts to create a psychopathic protagonist who actually does have an arc of development, and a motivation for his deeds in line with events that befall him is partially successful here. 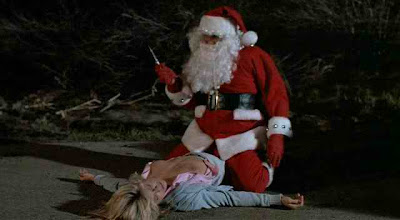 This is achieved with a series of episodic flashbacks the first of which is set around Christmas 1971. In this extended sequence we see 8 year old Billy Chapman (Danny Wagner) terrorised by his insane and sadistic grandfather, and then have to bear witness to the murder of his parents, his mother is also raped in front of him beforehand, by a nut job wearing a Santa Claus outfit. By the time we move to Christmas 1974 Billy is deeply embedded in the strict regimen of a Catholic run home for orphans. Here he is tied to the bed, beaten, and forced to confront his festive demons by a cruel and sadistic Mother Superior (Lilyan Chauvin). By the time we move to the tasteless and tacky 1980’s Billy seems fairly normal and well adjusted as he begins work at a toy store, but when he is asked to don a Santa outfit for the Christmas promotion he soon forgets the generosity of the season! 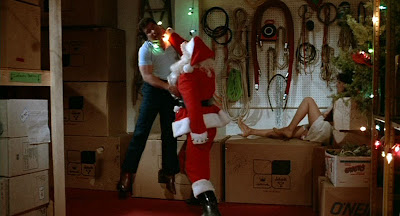 There are some witty and laughable touches here such as Billy garrotting his first victim with Christmas lights, and the decapitation of a bully on a sled is a major highlight. But the film tries too hard to have a moral undertone, and it comes across as contrived and simplistic. The morality of the film, such as it is, totally fails to cover up the essential truth of SNDN; that it is a mean spirited tawdry little film. This is a film which I believe was made by adults, adults who take every opportunity to cynically ridicule the festive season and present it as a time of sadists, perverts, and psychopaths, and not a single character is likeable. The anti-Catholic stance, which has been much lauded by other critics, whilst potentially commendable and interesting, is ultimately a device to include more scenes of empty cruelty. The few cursory efforts to criticise the commerciality of Christmas seem hypocritical - after all this is a product exploiting Christmas as well! The set pieces however are uniformly excellent, and the special effects very effective. There is much in SNDN for the horror fan to enjoy. Nevertheless despite these criticisms this reviewer is still mystified at the controversy the film caused on its initial US release. It was also heavily truncated in the UK by the scissor happy drones of the BBFC. The film makes it clear that this is a narrative about a young guy who dresses up in a Santa Claus outfit and goes on a killing spree - how this was construed by right wing pressure groups as a film about Santa Claus himself slaughtering people will forever remain a mystery.
© Shaun Anderson 2010
Posted by Shaun Anderson [The Celluloid Highway] at 16:36