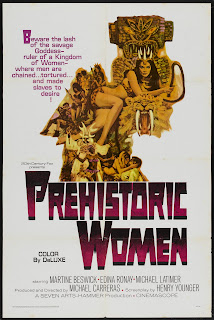 
The commercial success of the insipid She (1965) and the far more enjoyable One Million Years B.C. (1966) inspired the powers at Hammer to continue mining the rich landscape of adventure films set in the prehistory of lost worlds. The two films previously mentioned, were by the standards of Hammer, relatively big budget and lavish affairs. She had the commercial draw of Ursula Andress, while One Million Years B.C. had the draw of both Raquel Welch and Ray Harryhausen’s stop motion visual effects. Instead of maintaining these production standards however, Hammer showed predictable contempt for its audience with a thriftiness that ultimately destroyed the epic nature of future fantastical adventures. The inappropriately titled Prehistoric Women (aka Slave Girls - a more fitting title) was Hammer’s third ‘lost world’ film, and like the previous two was lead by a sex symbol - in this case the statuesque Martine Beswick. Beswick is by far the best thing about this movie. The name Michael Carreras attached in a creative role to any film is ordinarily a sign for me to press the eject button on my DVD player - and here he is both writer and director. With the exception of Maniac (1963), which in itself is hardly special, the directorial career of Carreras is an arid wasteland of incompetence. While Carreras is the primary reason for Prehistoric Women’s imbecility, it has to be said he is not the only reason. One of the most damaging decisions for the film was to shoot entirely on a soundstage at Elstree Studios. The usual brilliance of the Hammer technical team has vanished here, instead they contrive to create some of the most unconvincing jungle terrain you are ever likely to see.

The film opens with some ropey and unimaginative library footage of jungle nature in all its wild glory, before the inevitable jarring cut that takes us into the facile and bland studio set constructed for the film. The constriction of the frame might offer claustrophobia in a horror picture, but as this is meant to represent the wilds of Africa, the restricted space only emphasises the cheapness of this misguided endeavour. We are introduced to the character of David (Michael Latimer) a weary jungle guide who must put up with the idiocy of retired military men desperate for a trophy kill. Although there is a colonial element to this story that links to it contemporaneous Hammer productions such as The Reptile (1966), The Plague of the Zombies (1966), and The Mummy’s Shroud (1967), Carreras neither has the wit nor the inclination to develop it. Carreras is far more interested in developing retrograde depictions of wild eyed natives dancing to the jungle beat. The dancing functions in two ways in this film. It obviously offers mild titillation, but more importantly it provides a huge amount of padding. This is vital because the narrative is so thin and insubstantial. 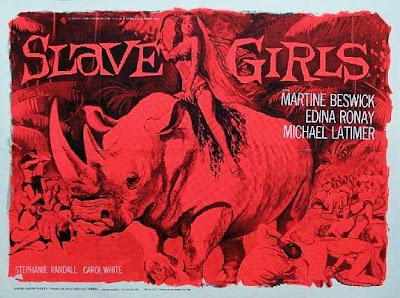 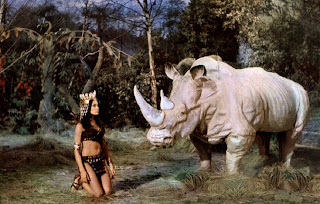 David shows off his local knowledge admirably when he offends a tribe that worship a white rhino and is sentenced to death. As the moron’s life flashes before his eyes he clutches the horn of the rhino statue in front of him, an action that freezes his would be executioners on the spot, and plunges him backward in time! David finds himself in a lush and fertile paradise inhabited by a plethora of skimpily clad cave babes. He has unwittingly found himself in a fraught society, one in which the brunettes preside as rulers over their blonde slaves. Their leader is none other than Kari (the gorgeous Martine Beswick) whom we first see emerging stark naked from a pool to inspect the new male arrival. Carreras tactfully shoots Beswick from behind, but this still remains an arresting and stirring image, in a film largely devoid of them. Like H. Rider Haggard’s Ayesha, Kari is a cruel leader, and in one scene kills a slave in cold blood for having the temerity to question the way she treats them. Kari has decided she wants David as her personal slave…and instead of leaping at the chance, the idiot challenges the methodology of her leadership. The themes of dominance and subjugation are not handled at all well, with the screenplay only offering a perfunctory discussion of gender politics. Instead we simply get a rather juvenile bondage fantasy from Mr. Carreras. 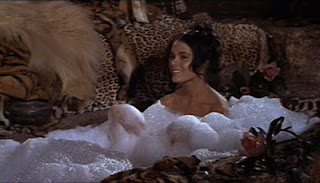 There is very little to recommend here, but it wouldn’t surprise me if the film was defended by lovers of trash cinema because of its camp credentials. I would admit that there is a lot of unintentional hilarity to be had. The scenes involving a group of ravaged men toiling in an underground cave are absurd, and the speed at which David ferments a rebellion that succeeds with ease is preposterous. Throughout all this silliness however Beswick manages to retain her dignity, she is the only member of the cast to do so. Michael Latimer is blandness personified, and how he falls for the utterly lifeless Saria (Edina Ronay) over Kari is perhaps the films greatest mystery. We do at least have an enjoyable score courtesy of Carlo Martelli to offer compensation for the nondescript visuals and the badly painted stagy sets. Were it not for the unintentional humour of Prehistoric Women this may well be the worst film ever produced by Hammer.
© Shaun Anderson 2011
Posted by Shaun Anderson [The Celluloid Highway] at 22:42