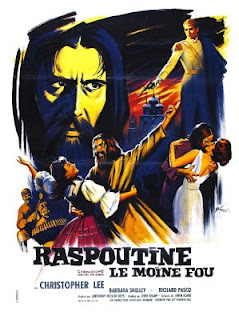 
Pompous know it all Christopher Lee has made a career out of playing stilted and regimented characters, so its no surprise really that his performances in Rasputin: The Mad Monk and The Wicker Man (1973) stand out. Lee has significantly less dynamic range than this Hammer colleague Peter Cushing, but what he did always bring is a certain gravitas and dignity to roles, that in all reality, didn’t deserve it. In Rasputin Lee was afforded his only opportunity with Hammer to express a more outlandish and eccentric dimension to his acting. The result is a powerhouse display, a marvellously excessive exhibition in which Lee eagerly flaunts his domineering physicality. Equally important is the booming tones of Lee’s vocal delivery, the raucousness and carnivalesque nature of Rasputin betrays a fierce intellect which is often communicated through his voice. The strength of Lee’s performance is such however that practically every other aspect of the film is dwarfed by his fierce intensity. Although Lee is supported by capable actors such as Francis Matthews, Barbara Shelley, Richard Pasco, and Suzan Farmer their performances are mild distractions from Lee’s hyperbolic histrionics. When Rasputin isn’t lighting up the screen with his greed, gluttony, drunken carousing, dancing, violence, and general blasphemy, the film is totally flat. The price for sitting back and enjoying such an overbearing and imperious performance is a terrible dramatic imbalance, an imbalance which ultimately leads to the failure of the film as a whole. 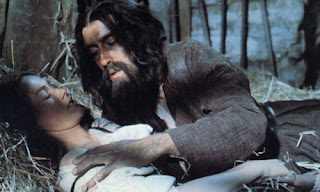 It comes as no surprise that the screenplay by Anthony Hinds has a creative attitude to historical accuracy. Instead the basic elements of Rasputin’s rise from rural obscurity to the palaces of St. Petersburg is transformed into a full blown gothic melodrama. Hammer maintains its reputation by having an attempted rape, hands cut off, acid throw in one characters face, and a brutal dénouement for our bearded anti-hero. Although Hammer did develop a strain of historical adventures, Rasputin is much closer to the gothic horrors. The opening scenes establish Rasputin’s healing powers, as he cures a dying woman in a country tavern. But the party that follows suggests Rasputin’s entire motive for performing his great act of generosity is to get free wine and have a knees up. From the offset Rasputin is entirely self centred, and it is this selfish determination for power and profit that sets him on a road that leads to the very heart of the Russian establishment. Rasputin is a blasphemer, but a very charismatic one. He acknowledges that his powers may have been granted by the devil, and this is unsurprisingly, enough to see him evicted from the monastery in which he resides. The production design of Bernard Robinson works well in these rural scenes, but the moment the action shifts to the capital the budgetary limitations take their toll. 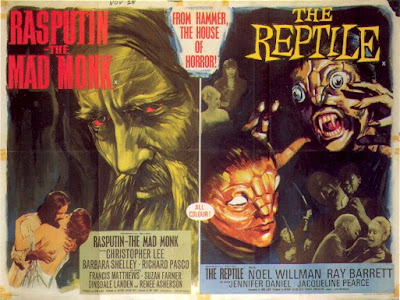 ﻿Rasputin is a very interiorised film, and while this adds a certain amount of claustrophobia, we are never given much sense of a wider world. More often than not in Hammer productions the low budgets are an inspiration to creativity, but this isn’t the case here. The story of Rasputin possesses an epic grandeur which Hammer are unable to convey on the recycled sets of Dracula: Prince of Darkness (1966). Because of this the film is also unable or unwilling to develop the crucial political backdrop that is so necessary to the tale. The events of the film exist in a bizarre vacuum, and Rasputin’s attempts to seize power are made laughable by the lack of context. His ambitions just aren’t impressive enough, because Hinds’ conception of the power structures and politics of Russia are non-existent. Because of this Rasputin is able to stroll into the confidence of the Tsarina with an effortless arrogance, and set up his own little practice. Where the film does succeed is in illustrating Rasputin’s skills of manipulation. The way he preys on insecurities and vulnerabilities does at least invest the character with the means by which to bring down a ruling class. 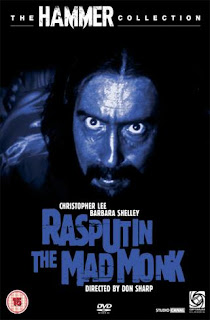 His influence is felt most devastatingly on the Tsarina’s lady in waiting Sonia (Barbara Shelley), who is enslaved to Rasputin’s malign will. A scene in which he forces her to apologise for a slight against his character, before slapping her face is an indication of the petty motivating forces working within him. Rasputin has tremendous ambition, but at the same time he is incredibly small minded and malicious. That he orders Sonia to kill herself when he has become fed up with her advances is ample evidence of this. Sonia’s fate is the great tragedy of the movie, and one she scarcely deserved. Rasputin is the embodiment of one of Hammer’s most persistent themes, he is the return of the repressed peasant classes, and he means to reduce the aristocracy to its knees. But not without becoming an aristocrat himself in the process. Unfortunately his uncouth boorishness and belittlement of his fellow man return to haunt him. In the assassination sequence Rasputin becomes an almost demonic figure, thus confirming the films allegiance to the ‘House of Horror’, and this extended sequence doesn’t disappoint. The one thing I will say for Rasputin is that it is a hell of a lot fun, often amusing, always engaging. For me it is a far more enjoyable film than the one it was shot back to back with.
© Shaun Anderson 2011
Posted by Shaun Anderson [The Celluloid Highway] at 15:10