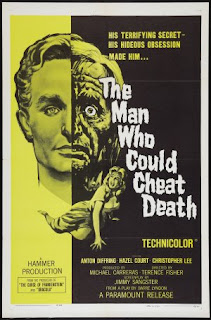 
Hammer’s 1959 production The Man Who Could Cheat Death was a sobering lesson in how the British studios unique brand of gothic horror could easily become stilted and uninteresting. There were warning signs in The Curse of Frankenstein (1957) which was sluggish and long-winded in places, but the appetite of cinema patrons for a sensational colour horror film in the dour and dreary late 1950’s, to a certain degree papered over the negative consequences of Terence Fisher’s unadventurous, unobtrusive and minimalist attitude to film direction. Fisher’s style however was particularly suited to Dracula (1958), The Revenge of Frankenstein (1958) and The Hound of the Baskervilles (1959), and this trilogy of excellent gothic pictures did what a Fisher film does best; shows off and celebrates other aspects of the production. Fisher was an extremely generous filmmaker, and one who instinctively knew that certain aspects of a film should be highlighted, while others should be left to linger in the shadows. A casualty of this approach was Fisher himself, whose status as a director was never recognised by contemporary culture. The Man Who Could Cheat Death was Hammer’s fifth departure into the Victorian trappings of gothic horror, and on almost every level is an unqualified failure; and while defenders of Hammer may argue that it fails in spite of Terence Fisher’s best efforts, I think Fisher needs to take his share of the blame. 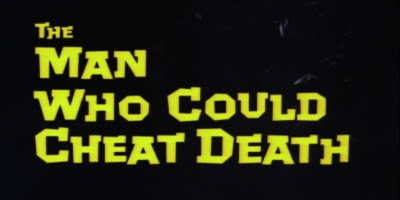 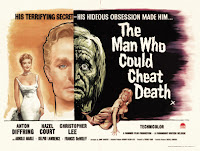 Jimmy Sangster provides yet another pared down screenplay for Hammer; on this occasion his source of inspiration was Barré Lyndon’s fable exploring the price of immortality The Man in Half Moon Street, itself an unimaginative riff on Oscar Wilde’s The Picture of Dorian Gray (1890), which was made into a film in 1945 by Paramount Pictures. One of the most bizarre alterations made by Sangster/Hammer to the source material was to resituate the narrative from London to Paris. The decision to set the movie in France adds nothing to the story. The film was shot entirely at Bray Studios in England, and the small cast is made up of British and German actors, with the former making no effort whatsoever to conceal their accent, or even attempt to communicate a sense of place through their performances. This decision speaks of incompetence, but the film suffered genuine misfortune when Peter Cushing chose not too accept the role of Dr. Georges Bonner. Instead the role went to the cold and mechanical German actor Anton Diffring. Diffring has ice water running through his veins, and the actor’s obvious discomfort with the romantic subplot featuring the buxom Hazel Court leaves a gaping emotional vacuum at the heart of the film. But Diffring does bring a climate of desperation, vulnerability, and anguish to the role, especially when faced with the encroachment of the 104 years he has been holding at bay. Every ten years Bonner must undergo surgery, and have a new gland transplanted into his body, and with each passing day his old colleague Dr. Ludwig Weiss (Arnold Marlé) doesn’t turn up to perform the deed, so his mania increases. 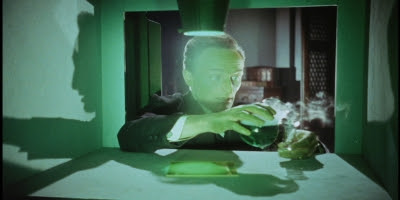 In fact Bonner has frequently resorted to murder, and a pattern of killings every ten years ultimately leads to a moral impasse with the aged Dr. Weiss, and to his own downfall at the hands of the amateur detection of Dr. Pierre Gerard (Christopher Lee). Bonner is a paradoxical character, a driven scientist determined to secure the secret to eternal life, and a sensitive artist who sculpts the feminine beauty he sees around him. Of course the sculpture is also a scapegoat for the pressing need that arises every ten years. Bonner’s has been a life of loneliness and isolation, able only to confide in Dr. Weiss. In this respect the remoteness of Diffring works in the characters favour, but ultimately it is impossible to find a shred of sympathy for this putrid and vain man of science. The philanthropic scientific ideals that motivated Bonner and Weiss on their quest for immortality has been completely engulfed by Bonner’s deluded sense of grandeur and power, an attitude which has convinced him that his life has more importance than any other. Much of the philosophical substance of the narrative is communicated through dialogue…and lots of it! The film betrays its theatrical originals at every turn. The only excitement we are gifted in the first half is Bonner’s frequent science-fictional visitations to his safe, whereupon he consumes a green potion to ward off the spectre of old age. 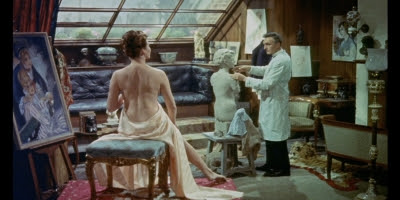 Fisher seems entirely comfortable for his camera to be as static as possible, and many of the interminable scenes set in drawing rooms are little more than lifeless tableaux; sometimes such methods make a film stately, elegant, and dignified, here it is just simply boring. However what it does do, as I alluded too earlier, is to show off the gorgeous production design of Bernard Robinson, and the Technicolor brilliance of Jack Asher. The cast is bulked out with Christopher Lee phoning in one of his typically dull and fastidious good guy roles, is it any wonder on the evidence of this that Lee was generally cast as a villain! Francis De Wolf turns up as a clueless flatfoot who is only able to solve the riddle of Dr. Bonner through Dr. Gerard’s deductions; Hazel Court is an unlikely love interest, are we seriously to believe she would go to such lengths in order to ensnare the repulsively taciturn Dr. Bonner? The one thing then we can surely rely on with Hammer is the excitement of seeing Bonner age seventy years in the space of seconds, and the makeup work is fairly good, but it is entirely undermined by having Bonner engulfed in flames before one of the most abrupt endings in movie history. The Man Who Could Cheat Death has become something of an obscurity from Hammer’s gothic golden age (despite a blu-ray release!) and this is where it deserves to stay.