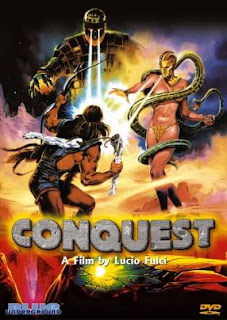 
It is not unfair to say that Fabrizio De Angelis and Ugo Tucci’s decision to hire Lucio Fulci as director for their horror production Zombi 2 (1979) saved his career. The pair embarked on a wave of excessively gory and increasingly incoherent horror pictures, inflicting such delights as The Beyond (1981), The House by the Cemetery (1981), The New York Ripper (1982), and Manhattan Baby (1982) on an unsuspecting public. These were all critical titles in Fulci’s cult resurgence in the 1990’s and beyond, and for many, Fulci’s work under the auspices of De Angelis represents his most impressive. Unfortunately some time between the release of Manhattan Baby and pre-production on Fulci’s next picture Conquest the two parted company. Little did Fulci know that whoring himself out to the highest bidder - in this case Giovanni Di Clemente - would have such a devastating effect on the quality of his films. I’m not arguing that the De Angelis produced films were masterpieces, only a complete asshole could make a case for Manhattan Baby. But Conquest is so nonsensical and drab, and so utterly bereft of intelligence and charm, that one cannot help but conclude that Fulci’s current standing amongst horror aficionados is as much down to De Angelis as it is Fulci. 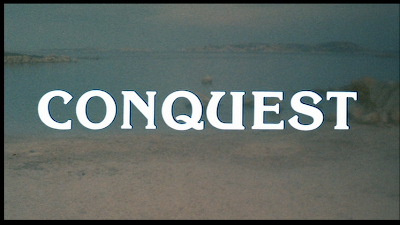 With Conquest Fulci added sword and sorcery to an overflowing generic resumé that included comedy, spy capers, westerns, gialli, historical dramas, crime thrillers, and horror movies. The screenplay by Gino Capone, José Antonio de la Loma and Carlos Vasallo takes its cue (as did all the other cheap Italian imitations in this short lived cycle) from Conan the Barbarian (1982) and The Beastmaster (1982) [itself a cheap rip off of the latter] and is embodied in the character of Mace played by Jorge Rivero. Mace is a mysterious warrior wandering the landscape of a savage land. He has a special relationship with the natural world; loyal hawks act as guides through the hazardous terrain, and even dolphins come to his aid later in the film when he finds himself tied to a cross and then plunged into the ocean below. While he treats the lives of animals as sacred, the same cannot be said for human beings. In one utterly senseless moment he murders a man in cold blood in order to steal a slaughtered pig, he feels justified in eating the flesh of the animal, because he didn’t kill it! This wouldn’t be so bad were it not for the sage way that Mace delivers this ‘moral’ lesson to the bland Ilias (Andrea Occhipinti), who nods along with knowing approval. This is symptomatic of the arrant idiocy of this misguided and imprudent production. 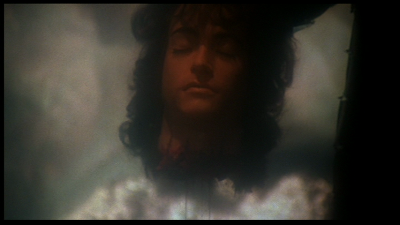 Ilias himself hails from a more civilised land, and armed with a magic bow and arrow that fires out bolts of blue lightning, he travels to this new land and sets forth on a vague quest to rid the realm of the evil that blights it. The problem with Ilias’ quest is that he doesn’t know what he’s searching for. He spends much of the film wandering aimlessly around the marshes and swamps hoping for something to happen. And when something finally does he his totally ill equipped to deal with it. Ilias is totally reliant on the ‘wisdom’ and strength of his barbarian buddy, who makes the absurd claim that he has no friends, and then spends the entire film risking his neck to save a man he’d only met hours before. But any sense of linear time is completely absent from Conquest, and the ensuing confusion stems from the fact that there is little or no continuity to the narrative. With its non linear approach, disordered spatial arrangements, occasional moments of surreal imagery, and the odd moment of Fulci’s trademark gore it’s clear to me that Conquest isn’t much different from the horror films Fulci had recently been making. But the fantasy element allows the filmmakers even more leeway to indulge in plotless absurdity, and the result is an incomprehensible mess. 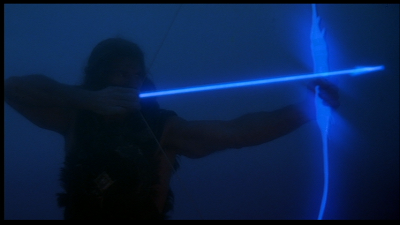 The villain of the piece is a sadistic sorceress called Ocron (Sabrina Siani) who spends most of the film writhing around naked with a snake coiled about her body. I had no major objection to this I have to admit. She rules the land through fear, and controls a modest army of dog faced brutes by claiming she can control the sun. The screenplay naturally provides her with no back story, and to add to the confusion her motivations and behaviour are dictated by dreams and premonitions. The whole thing has the feel of a dream, and while this might be used as a defence for some of Fulci’s horror films, here it is irritating in the extreme. The visual style of the film which employs hazy, under lit, and soft focus cinematography is bizarre to say the least. It was clearly a strategy on the part of the filmmakers, because the murky and misty style is maintained throughout…but why? The only possible answer I can offer is that it gives the film a dreamlike and otherworldly sensibility, but once again the result is exasperating. I’m sure I’m not alone in initially thinking it was due to poor print condition. So can we fall back on the musical talents of Claudio Simonetti to provide much needed relief? Whilst Simonetti’s synthesiser music works fine in isolation, it is edited into the film in an intrusive fashion…it soon becomes repetitive, grating and (is there a theme developing here) extremely irritating! Conquest is an unmitigated disaster, it is dull, devoid of purpose, illogical, and has a plot that functions entirely at random. An amazingly incompetent achievement considering that Lucio Fulci had made The Beyond and The House by the Cemetery just two years before.
© Shaun Anderson 2012
Posted by Shaun Anderson [The Celluloid Highway] at 20:55