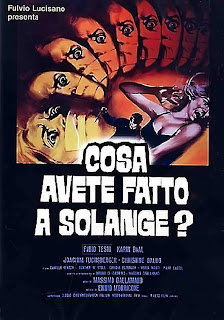 AKA:
Cosse avete fatto a Solange?
Who's Next?
Solange
Terror in the Woods
The School that Couldn't Scream
The Secret of the Green Pins


In January 2011 I dedicated an entire month of The Celluloid Highway to the Italian giallo. Of the films I reviewed that month I was most impressed by Massimo Dallamano’s 1974 entry What Have They Done to Your Daughters? I particularly enjoyed the confident manner in which the narrative strategies of the giallo were fastened to the high octane thrills and spills one would commonly associate with the poliziotesschi. From 1946 to 1966 Dallamano carved out a career as a cinematographer, the culmination of which was his work on A Fistful of Dollars (1964) and For a Few Dollars More (1965). But as a director we are only left with the merest of legacies. He only directed twelve feature films before his untimely death in a car accident in late 1976. On the strength of Venus in Furs (1969) and the aforementioned What Have They Done to Your Daughters? I was determined to explore as many of his dozen films as I could. Unfortunately I was waylaid on this quest and Dallamano was filed away for future reference. A year later I finally got the opportunity to screen his first giallo What Have You Done to Solange? and was immediately surprised (and not to mention a little weary) of the unanimous praise the film has received in critical circles. Only a select band of gialli have reviewed as well as Solange. I expected the film to struggle to live up to its reputation, but I’m pleased to report this is one film that is deserving of its current status amid the highest echelon of the cycle.

This particular entry was an Italian/West German co-production, and the screenplay by Dallamano and collaborator Bruno Di Geronimo was loosely based on the Edgar Wallace crime novel The Clue of the New Pin (1923). The casting of Joachim Fuchsberger as Inspector Barth adds a further link to the West German ‘Krimi’ cycle and confirms a certain amount of cross pollination between the two. The influence of the ‘Krimi’ on the giallo has never really been satisfactorily explored by scholars, and it doesn’t help that that the ‘Krimi’ has largely remained under-researched and under-appreciated. The self-referential or intertextual quality to Solange adds an intriguing layer to proceedings and is never ham fisted in its use. But the most distinguishing feature of the film is its attention to plot detail, and its absolute loyalty to a plausible mystery which concludes in a most satisfying and acceptable fashion. The film immediately benefits from the decision to shoot entirely on location in London. Admittedly the filmmakers make very little use of recognised landmarks, but a subtle dichotomy is created between the city and the countryside. The former the site for a clique of schoolgirls to explore their sexuality, the latter a place they must visit in order to rectify the mistakes made in that exploration. The rural locations subsequently become a negative space - a place for violence and dirty work - of murder and amateur abortion.

The mystery centres around St. Mary’s Catholic College for Girls, an institution that aches with hypocrisy, sexual tension, and perversity. Fabio Testi is on hand to play Enrico Rosseni, a gymnastics teacher who is trapped in a loveless marriage to the stern and severe Herta (Karin Baal). He relieves himself of this domestic nightmare by embarking on an affair with underage schoolgirl Elizabeth (Cristina Galbó), and soon finds himself squarely in the sex maniac frame amid a spate of child murders. The film goes to some lengths to establish the bland domesticity of the Rosseni’s relationship, and it exists in sharp contrast to the verve and effervescence of the affair. Testi is very good at making the switch, but when called upon to express emotion the actor is found wanting. If there is any weakness in Solange then it rests with the films leading man. Ironically it is the murder of Elizabeth (drowned in a bathtub) that brings Enrico and Herta back together. With his dismissal from the school Enrico becomes the amateur detective, and his wife takes the role of assistant. The solving of a mystery becomes a means of recuperation, a cathartic experience that enables Enrico and Herta to once again see why they fell in love.

This is a film unusually interested in minor details, and the screenplay sets up a gallery of characters who are all hiding something. The film does waste far too much time on putting Enrico in the frame, but the revelations that end the film are genuinely surprising, and extremely effective. The grisly and shocking methodology of the killer becomes entirely plausible when the explanation is given. We are briefly afforded the site of an X-ray of one of the victims, and it is amongst the most disturbing images to grace a giallo. In the first half of the film themes of innocence and purity are woven into the fabric of the narrative, and are then subverted in an ironic counterpoint at the conclusion. The film is full of little ironies, and it is able to alight on moments that seem inconsequential because of an incredibly patient and careful method of storytelling. The precise narrative is complimented by the beautiful and meticulous widescreen cinematography of Aristide Massaccesi; rarely has the frame been used to such excellent effect in a gialli. Another touch of pure class is the score by Ennio Morricone which is one of his most memorable. What Have You Done to Solange? is an unforgettable and poignant film, it is a quietly devastating examination of lost innocence. Its final freeze frame image of the bereft Solange (Camille Keaton) possibly the most haunting visual to feature in a giallo.