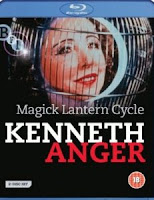 
My introduction to the works of Kenneth Anger began when I saw Inauguration of the Pleasure Dome (1954) [on the Channel 4 show Midnight Underground.] My first thoughts were “What the hell is this?” Bizarre imagery set to classical music, with a guy who had impressively long fingernails. In the pre-internet days, a trawling of the library uncovered a book featuring underground filmmakers. This led to my quest to track down as many of his works as possible, which was not easy in the days before multi-region DVD players. Most of the copies of Anger’s films were American, but eventually, through the classified ads in a magazine, a, cough, bootlegged copy of nine of his short film were mine, albeit on a Maxell C180. 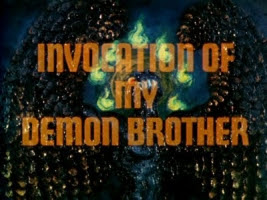 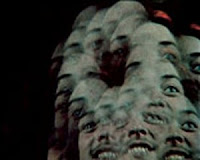 These nine films, collectively known as the Magick Lantern Cycle, and spanning the years 1947 to 1980 are, to all intents and purposes, a nine-part homage to the thoughts and theology of Frater Perduarbo himself, the occultist Aleister Crowley. Crowley’s Egyptian-based philosophy, Thelema, places emphasis upon ritual and magick in order to access one’s Higher self, or Demon Brother. Simplifying a complex belief system drastically, the Demon Brother will enable the proponent to follow their True Will or path in life. The path is to be followed without regards to ethical considerations: Crowley’s phrase, which was inspired by the works of the 15th century monk Francesco Colonna, “Do what thou wilt shall be the whole of the Law” pretty much sums up the whole thing. Thelema’s usage of stylised ritual and symbolism is perfectly suited to avant garde cinema, and perhaps its greatest proponent was heavily influenced both spiritually and visually. The Thelemetic emphasis on fulfilment of desire runs through the whole of Anger’s Cycle. Homoeroticism, violence, drug use, Nazi imagery, biker gangs and Jimmy Page are presented without a moral compass. They are simply ‘there’. 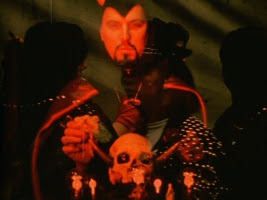 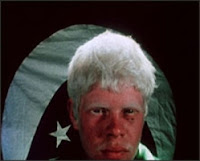 Anger’s two most overtly ritualistic films are Inauguration of the Pleasure Dome and Invocation of my Demon Brother, with the latter a paean to Lucifer in his incarnation as the god Mars. Tellingly, Invocation actually came into existence from the ashes of an abandoned project, Lucifer Rising. Red imagery features throughout and, indeed, the whole atmosphere is aggressive. Pleasure Dome’s almost serene, cerebral tone is entirely absent here. The Rolling Stones were a spent force by 1969, but Mick Jagger provides a perfect soundtrack: a grating, hypnotic and discordant piece played on a Moog synthesizer which, allied with the repetitive, fast editing of Anger, create a cinematic equivalent of psychobilin. ﻿Charles Manson groupie Bobby Beausoliel is a truly frightening Lucifer, with bleached hair and eyelashes, he presides over a magickal ritual featuring hippy types and cigarettes which probably aren’t Silk Cut. Images of US troops in Vietnam are intercut with brief glimpses of the Woodstock Festival, the ceremonial funeral of a cat, Christ-like figures and naked men. Anger himself appears as a Magus performing an Egyptian-style ceremony and Anton LaVey camps it up as Satan, complete with black cloak and plastic horns. LaVey’s own philosophy is, interestingly, a fairly dilute form of Crowley’s. Take a look at LaVey’s The Satanic Bible and try to read it without laughing. 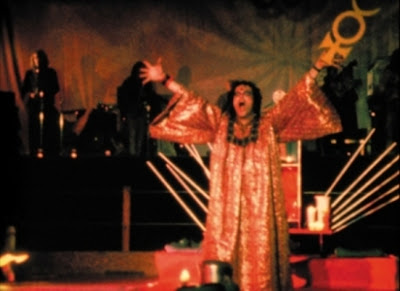 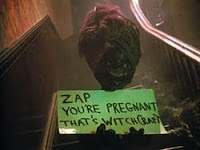 ‘An assault on the senses’ is perhaps a cliché, but is appropriate here, and was Anger’s intention. The last few minutes are especially fierce, featuring epilepsy-inducing flashing images, the Eye of Horus and a supremely creepy image of what may be the titular brother, complete with angel wings and knowing smile.  The most unsettling scene in Argento’s Deep Red (1975), which features a doll on a tricycle, is prefigured here, where an African-looking fetish doll rapidly descends a staircase in stop-motion animation. The inexorable advance also echoes that of the spirit of Sadako in Nakata’s Ring (1998), but the doll at least doesn’t come out of the TV. A card held by the doll reads “Zap your pregnant that’s witchcraft” and that’s it! Not, perhaps, as perfect a film as Puce Moment (1949), Invocation is, however, an excellent example of Anger’s genius. Few directors have his sheer audacity in overlaying image upon image and his complex approach to symbolism. Many directors can produce technical and artistic magic, but Anger is one of a select handful who can invoke real magick.
© Rich Flannagan 2012


Many thanks to Rich for this wonderful guest review, the first of many I hope. If you like what you read then please head over to Rich's excellent blog 0.50 Action Express - Rich is also a regular contributor to the peerless Italian Film Review, and to the equally impressive Videotape Swapshop.
Posted by Shaun Anderson [The Celluloid Highway] at 21:24