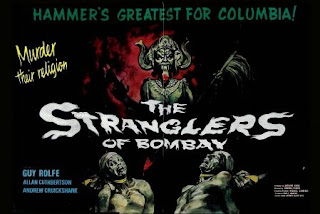 
At first glance one might assume that Hammer’s 1959 production The Stranglers of Bombay was a departure from the successful cycle of gothic horrors the company had been churning out since The Curse of Frankenstein (1957). The reality is that despite its distinct historical and cultural setting the film is a solid example of what was increasingly becoming known as ‘Hammer Horror’. The structure of the movie will be all too familiar to those well versed in the films of Hammer and specifically those of in-house director Terence Fisher. The narrative is clearly demarcated along the lines of good and evil, and the rather simplistic Manichean universe that bound Hammer’s horror cycle at the time is effortlessly maintained. The screenplay by David Zelag Goodman opts to emphasis sensationalism over an intelligent examination of colonialism. So while we are offered up such delights as brandings, eye gouging, and mutilation, the question of imperialism remains a vague backdrop. Nevertheless colonialism would form the background to a number of later Hammer pictures including The Terror of the Tongs (1961), The Brigand of Kandahar (1965), The Plague of the Zombies (1966), The Reptile (1966), and The Mummy’s Shroud (1967). The subject was never really explored with any degree of sophistication, but it did achieve a metaphoric highpoint in The Reptile. There was a great deal of potential in the premise of The Stranglers of Bombay for it to stand alone, but unfortunately it isn’t quite able to escape the strictures of a well rehearsed formula. 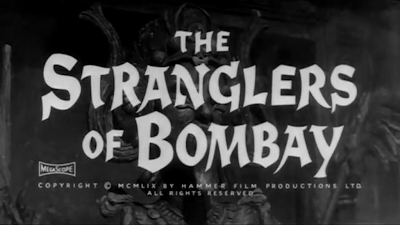 India was ruled for almost two centuries by the British East India Company, and the film opens with their monopoly under threat after a number of attacks on their trade routes. The seething tensions that exist are not between the indigenous population and their British overlords, but between British capitalists and the BEIC, whom the former believe are not doing enough to ensure the safe passage of their cargo. The fact that thousands of natives have also mysteriously disappered is a minor irritation compared to company profits. However this is not the case for Captain Harry Lewis (Guy Rolfe) who crusades on behalf of the poverty stricken populace and is determined to get to the bottom of the mystery. Harry is of course whiter than white, his standing as a beacon of purity is beyond question, but he has one major handicap. He is not a member of the British upper classes, and in addition to ignorance he must also do battle with the class divide. Although the film is set in India The Stranglers of Bombay is a very British story, and with questions of class flying around, it is inevitable that questions of race will also arise. That the film is racist is beyond question; the cowed native population are terrified of the Cult of Kali, they remain tight lipped, aiding and abetting an odious conspiracy. The cult members themselves are savage, sadistic and brutal. Harry’s closeness to the lower orders aids his quest, but it’s his status as an enlightened westerner that propels him forward in the face of mounting adversity. 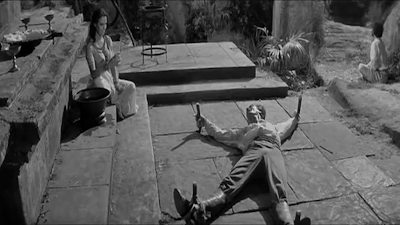 The Cult of Kali who also went under the nom de plume of the ‘Thugee’ cult apparently claimed close to 2 million victims. Their method of extermination was to strangle their prey. The explanation for this is given in an early sequence as the High Priest (George Pastell) tells the story of Kali to an enraptured audience. The cult is a dark and sinister force, but one that has extended its influence to the highest echelons of Indian society. Their methods are base and cruel, but their motivations remain somewhat vague. Less vague are the intentions of Patel Shari (Marne Maitland) who is the only character that truly resents the boot of colonialism. But that has more to do with his own personal circumstances than any concern for the people. The conspiracy elements are well constructed and help to develop a sense of menace and dread. That the cult members go about their violence at night and in silence only adds to this climate of fear. This is best illustrated by a scene in which upper class twit Captain Connaught-Smith (Alan Cuthbertson), who has totally misread the culture and attitude of the people, but has assumed control because of his class, meets his maker in a desolate tract of countryside. 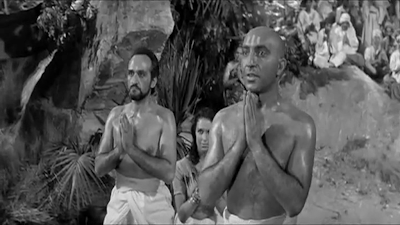 Unfortunately the cult never becomes anything more than a force of evil. It is a simplistic device represented by simplistic performances. Its status as such is enforced by a scene in which Harry is saved from the unwanted attentions of a cobra by a mongoose. Even nature is working alongside Harry to defeat the Thugee threat. One area in which we can always rely on from Hammer is the production design. Bernard Robinson excels himself here with a bustling Indian marketplace recreated at Bray Studios. Meanwhile the Buckinghamshire and Surrey countryside doubles for the trade routes that are fraught with danger. Such creative brilliance is badly required, because the casting of the film is unusual to say the least. This must be one of the few Hammer films made at the peak of their popularity that didn’t possess a marquee name. But the film does possess Terence Fisher and the musical contributions of James Bernard. However the inability of Fisher to create something other than a straightforward ‘Hammer Horror’ film with such intriguing material is very disappointing.
© Shaun Anderson 2012
Posted by Shaun Anderson [The Celluloid Highway] at 19:36