As The Celluloid Highway appears to be undertaking something of a mini Michael Mann retrospective (and I stress the word mini, Mann has done little that has interested me after Manhunter [1986]) I thought it only appropriate to return to his debut picture Thief, and the contribution to it, of the German progressive electronic group Tangerine Dream. At this point in the bands history they were relative novices to the world of soundtrack composition. Their first soundtrack was for William Friedkin’s haunting and often beautiful, but ultimately misguided, remake of Clouzot’s Wages of Fear (1955) which went under the name Sorcerer (1977). Without a doubt the textured soundscapes of Tangerine Dream were a major creative highlight of the troubled production. In these early formative soundtrack years for the band their type of cosmic electronica was often used as a counterpoint to the unfolding narrative. Their cold and clinical tones would seem wholly inappropriate for the sweat and dirt of a poverty stricken area of South America, but time and again the music saves Sorcerer from becoming little more than a mild distraction. 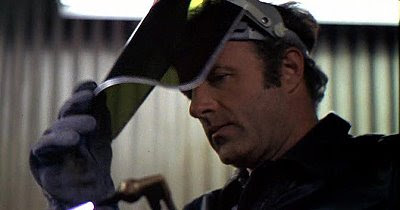 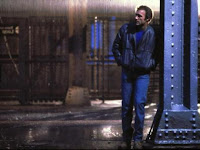 The rain soaked street life of Michael Mann’s debut is equally ill fitting, but the expressionistic and noir visual strategies pulse with a neon rhythm that compliments the music rather well. With the exception of early albums such as Electronic Meditation, Alpha Centauri, Zeit, and Atem (the so called ‘Pink Years’), and the first few albums for Virgin Records, the albums of Tangerine Dream became interchangeable. This extends to their soundtrack work and is in evidence on Thief. Both Beach Scene and Beach Theme are the same track, but slightly remixed. And the track Igneous is a remix of Thru Metamorphic Rocks from their excellent 1979 recording Force Majeure. The two Beach tracks represent the commercial heart of the Thief soundtrack. This is one of the most appealing melodies ever composed by the group, and quite rightly has a prominent place within the film. Two versions of the soundtrack exist; the most common version contains both versions of the Beach track, but omit’s Craig Safan’s rock number Confrontation, which plays over the end credits. The original LP released on the Elektra label contains this song as does the 2004 CD re-issued on Wounded Bird Records. As an indication of Tangerine Dream’s prominence in the UK, the soundtrack album achieved a respectable peak position of No 43, and spent three weeks on the chart. A promotional single featuring Dr. Destructo backed by an excerpt from Diamond Diary was also released. 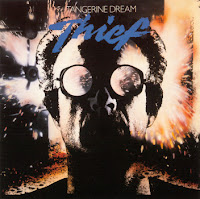 It is high time for me to cease my infernal babbling and allow the music to speak for itself. If you haven’t heard any of this music before…where have you been?? And if you have, I hope you enjoy it again!


Posted by Shaun Anderson [The Celluloid Highway] at 18:36