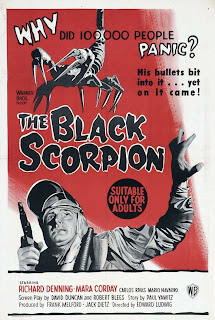 
The Black Scorpion is a mundane pillar of unimaginative derivation. It efficiently sweeps through the landscape of convention in a desperate bid to resurrect the insectoid nightmare of the far superior Them! (1954). But if one digs around determinedly in the generic soil, one discovers that The Black Scorpion still manages to possess an historical importance. The meta-narrative (apologies for the academic jargon) of 1950’s mutant monster movies is one which explores the perils of atomic radiation, the side-effects of H-bomb tests, and the misuse of a science and technology that has been appropriated by the military. In a novel twist The Black Scorpion opts to entirely do away with this angle. There isn’t a single mention of radiation in this film, and the gigantic scorpions that terrorise the Mexican countryside and eventually the nation’s capital are freed from the bowels of the earth by a catastrophic volcanic eruption. For once mankind is not to blame for the ensuing chaos, but is instead at the mercy of a natural disaster, and at the mercy of creatures that have evolved in secrecy in a vast underground cavern. As a result the sheer monstrousness of the adversary can be combated without the lingering sense that perhaps mankind is getting what it deserves for meddling in the animal kingdom. There is no guilt complex here, and no return of the repressed. The Black Scorpion becomes one of the purest and most straightforward of all 1950’s ‘Creature Features’, it is divested of the extraneous baggage that slows down its contemporaries, its simplicity is a major asset. 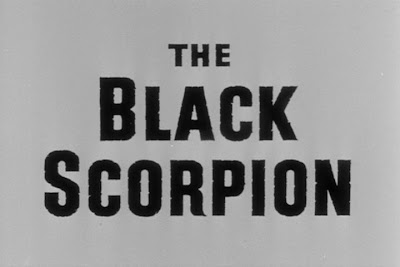 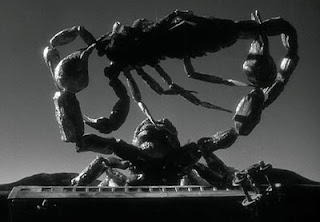 The second distinguishing feature the film possesses are the wonderful special effects of veteran artist Willis O’Brien. O’Brien had been contributing fantastical effects to cinema since 1915 and reached a position of prominence in his field with films such as The Lost World (1925), King Kong (1933), and The Son of Kong (1933). His influence was especially felt on the young Ray Harryhausen who had the pleasure of working with him on Mighty Joe Young (1949). O’Brien’s designs for The Black Scorpion are its most striking feature. They move with frightening rapidity, and there is an authenticity to detail which makes these monsters amongst the most chilling of the decade. Their first appearance is particularly memorable - one smashes up a car, and another plucks a telephone wire repairman off his pole and crushes him to death in its pincer. Less successful however are the close up shots of the monstrous face, all bulging eyes, fangs and mostly oddly of all a thick viscous drool which drips from the beasts jaws. The repetition of said close up is one of the most annoying aspects of the film, this shot is repeated at least twenty times throughout the film. A number of other effects also fail, most notably the unconvincing matte shots of the scorpions invading Mexico City, but O’Brien’s animation more than makes up for this. 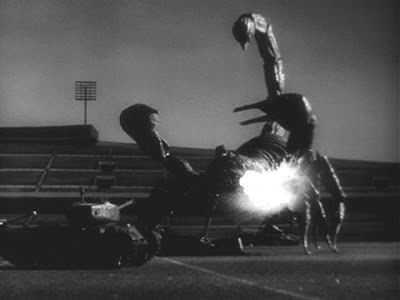 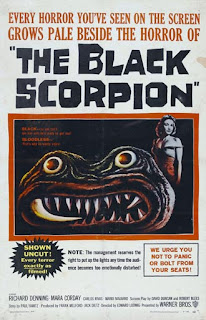 The rest of the film is hackneyed and predictable. The screenplay by David Duncan and Robert Blees is perfunctory and moves along with mechanical precision. Duncan also contributed screenplays to The Monster that Challenged the World (1957) and Monster on Campus (1958) which were hardly earth shattering affairs. Blees went on to write much more interesting material with Frogs (1972) and Who Slew Auntie Roo? (1972). The geologists played by Richard Dennings (a sci-fi veteran of Creature from the Black Lagoon, Target Earth, Creature with the Atom Brain and Day the World Ended) and Carlos Rivas never rise above cliché. Dennings plays Hank Scott, his all American forename is enough to tell you he’s the no nonsense action type. Naturally the relationship of the scientists is complicated by the token love interest, which in this case is the ranch owner Teresa (Mara Corday). She attempts to assert her power and mix it up with the guys, but in the end she is putty in Hank’s hands. Fortunately it doesn’t develop into a love triangle, there is no chance in a film of this nature for the Mexican to get the girl. The film does make some cursory observations about the impoverished society of San Lorenzo, but this is appropriated to highlight the bravery and sympathy of our heroes. The inevitability of the plot does make the extended scenes of character interaction incredibly tiresome, and like most movies of this type you’ll be itching for the scorpions too emerge from their lair and tear people to pieces. 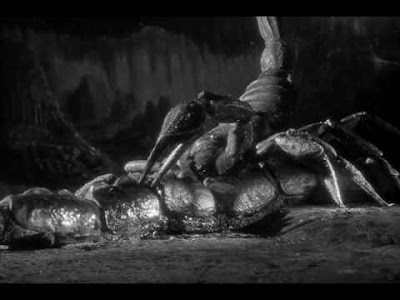 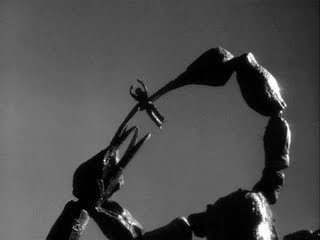 The centrepiece of the film is a sequence in which Hank and Ramos descend into the murky depths of a huge cavern in order to discover more about their adversary. What they find is a nightmarish realm in which the scorpions are not the only gigantic creatures. They witness a fight to the death between a scorpion and a giant worm, but even more disturbing is a repulsive giant spider. This sequence gave O’Brien an opportunity to recycle material that was intended for King Kong and it becomes a highlight. Another highlight is the destruction of a commuter train as the scorpions make their way to Mexico City. But by the time they get there they have all been vanquished by the fury of a giant black scorpion which only has death and destruction on its mind. Another pleasure of the film is the excellent location work, both in the Mexican countryside and the city. This offers up some interesting use of space and landscape and gives the film a distinctive scope and breadth. Despite being hamstrung by an utterly imitative screenplay The Black Scorpion still somehow manages (thanks almost entirely to Willis O’Brien) to exact a strange fascination. This is certainly a lesser film in the annals of 50’s sci-fi/horror, but it is eminently watchable, and very enjoyable.
© Shaun Anderson 2011
Posted by Shaun Anderson [The Celluloid Highway] at 23:55