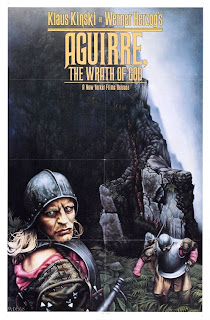 
In 1972 German filmmaker Werner Herzog travelled into the dark heart of the claustrophobic Peruvian jungle, armed with a camera, a skeleton crew and an army of Indian extras in order to film Aguirre: Wrath of God, an astonishing work of film art that would herald his international breakthrough, and eventually become one of his most celebrated works. On one level Aguirre is an epic adventure film, and as such it has a linear and easy to follow narrative. This linearity marked a break from Herzog’s past efforts. Herzog also cast a recognisable international figure in the shape of Klaus Kinski as the eponymous plotter Aguirre. Therefore its clear that this was a slightly more commercial venture from a director who previously seemed more allied with an Avant-garde style of filmmaking. 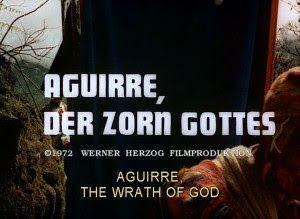 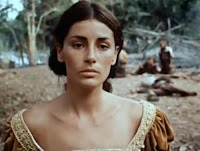 The film follows a ragged band of Spanish conquistadors traversing the inhospitable hell of the jungle in order to find the fabled and mythical city of gold El Dorado. Their failure to find it and eventual demise makes a significant statement about western greed in an age of rampant and brutally hard-headed colonialism. The political intrigues of this period in history are replicated within the microcosm of this group of soldiers. The plotting, scheming and skulduggery of Aguirre illustrating that duplicity is a common currency. This is a colonial force devastated by bitter in fighting, destined for defeat long before they entered the nightmare of the jungle. Of course this works in allegorical fashion, and many commentators have seen Aguirre and his methods and eventual insanity as a comment on the fascism that will forever cast a spectre over the German psyche. This reading is certainly there, and any character who proclaims himself to be “the wrath of god” will naturally be compared to the brutal dictators of the twentieth century. 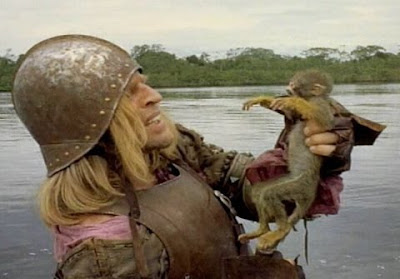 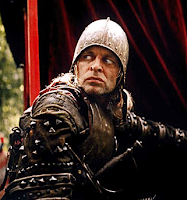 The colonial adventure of course is given purpose and thrust from the hypocritical religious institutions who sought to spread the word of Christianity to those who had no concept of it. This hypocrisy is dealt a devastating blow by Herzog who includes a monk acting as a narrator, but a denizen of Christianity who is persuaded to remain because of his own greed for gold. Many of the themes can be traced back to Joseph Conrad’s tale of ‘going native’ Heart of Darkness. But whereas Conrad dealt with issues of race and imperialism, Herzog focuses on the subjective realm of dream and hallucination. The defeated group of soldiers drift endlessly on a raft, picked off by unseen Indians, controlled by a man who is a total nutcase. The sight of a boat in a treetop as commonplace as the arrows that fly out of thin air. The initially seething Urubamba river acts as a metaphor for the power struggle in the group, by the end the quiet solitude of the river becomes a metaphor for a delicately balanced realm of fever dreams. 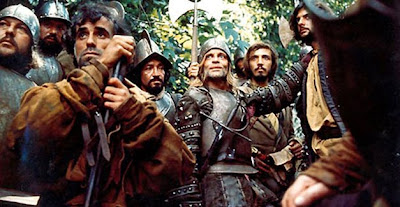 The film abounds with one stunning shot after another. From the opening sequence of hundreds of soldiers clambering down a narrow pathway on the fog enshrouded and treacherous surface of Machu Pichu, to the signature 360 degree camera pans that Herzog indulges in to show the desolation and loneliness of the raft as it floats into certain oblivion. This is a film overflowing with symbolism and metaphor, a poetic treatise on madness, ego, dreams and greed. These values are embodied firmly in the grim and unusual physique of the outstanding Klaus Kinski. He gives a towering performance of such intensity that one feels that we are seeing Kinski as well as Aguirre slowly unravelling in front of us.
﻿© Shaun Anderson 2010
Posted by Shaun Anderson [The Celluloid Highway] at 15:51