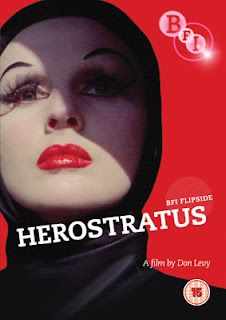 
This troubling and challenging piece of experimental cinema almost defies a simple explanation. To reduce it to mere plot or narrative mechanics is to perform an injustice of which the film is undeserving. It may on the surface utilise certain conventionalities of mainstream narrative cinema, but this is a film about what lurks underneath such pretence. Like Jean-Luc Godard, Australian filmmaker Don Levy utilises film form itself as part of his strategy of attack. There is a self awareness in this film that to use mainstream methods of representation is in itself a statement of hypocrisy. If one is to challenge social and political institutions and to interrogate questions of history and our failure to learn from it, one must provide a revolutionary framework of representation in which to do it. Godard was aware of this, which was why film form was fore grounded in his cinema, and Don Levy seems fully aware of this too. Levy makes exceptional use of montage, one juxtaposition equates the bloody mechanics of an abattoir with the beauty of the female form. What exactly this signifies and means is unclear, it could possibly be a statement on the commoditisation of the human form - and this reading is in keeping with the films general attitude toward the marketplace and the forces which govern it. But the meaning is less important to me, it is the physicality of the images themselves which linger in the mind. The fast cutting images assault and on some occassions offend the senses, but every frame is part of a very delicate composition. Levy also makes use of newsreel footage and documentary material of concentration camp victims to create a statement about the failure to right the wrongs of the recent past, and too address the underlying issues that led to the attrocities committed in World War Two and Britain’s part in the conflict. 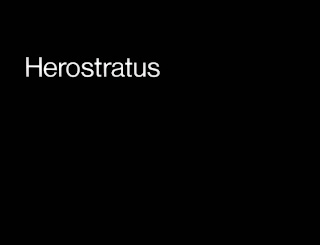 British cinema has few genuine examples of counter-cultural cinema and it comes as no surprise to discover that the distribution of Herostratus was very limited. The film is not only a catalogue of challenging film techniques, but also has an incredible patience with the construction and motivations of its central characters. In exploring their psyches and unflinchingly depicting their breakdowns the film blurs the lines between fiction and documentary. The young poet Max (Michael Gothard) is an inscrutable young man whose frustrations with the inadequacies of modern civilisation has led him to an upmarket advertising agency where he pitches his own suicide. The character will divide audiences, and whilst he spends much time preaching existentially, ultimately Max seeks fame and popularity. Max is a hypocrite, envious of those who have achieved success within the mechanics of late capitalism and is only able to vent his frustrations by smashing up his hovel of a flat and insulting the very system he secretly craves to be a part of. In this respect the outsider status of Max remains, but his journey has ultimately led him in circles. 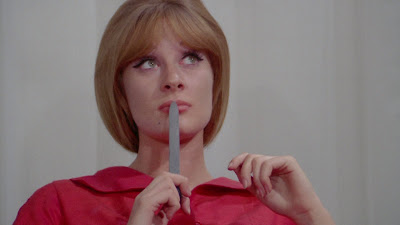 Other characters are less clear cut - Farson (Peter Stephens), the owner of the ad agency is a silky smooth devil in a suit, a man dedicated to the high concept, but who ends the film on his knees before Clio (Gabriella Licudi) as broken as Max. Clio is the most perplexing of the characters and the film ends on a particularly inscrutable note with her character screaming and crying - it is at this point and several others during the film that the film seems to go far beyond the fictional space and into the realm of the actors personal lives. This is further confused by a cyclical time structure in which certain events and sequences are pre-figured within the imagination of Max. The result is a film that ultimately offers a world without linear progress, one that suggests that we will never learn from the past but are in a time loop destined to repeat past attrocities for eternity.
﻿© Shaun Anderson 2010
Posted by Shaun Anderson [The Celluloid Highway] at 22:23