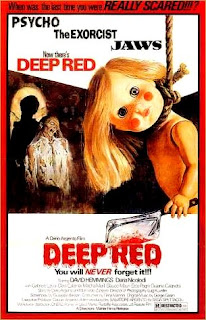 
After the critical and commercial failure of Dario Argento’s historical comedy The Five Days of Milan (1973), he returned chastened to the familiar terrain of the giallo. This was a territory that Argento had helped to both popularise and innovate with such trend setting suspense filled films as Bird with the Crystal Plumage (1970), The Cat O’ Nine Tails (1971) and the obscure Four Flies on Grey Velvet (1971). For his fourth and ultimately defining entry into this subgenre he enlisted the writing skills of frequent Fellini collaborator Bernardino Zapponi, and between them they concocted a witty, literate, and truly exhilarating example of post-Hitchockian suspense. Almost every formal trick conceived of by Argento succeeds here. From the saturated and vivid colours brought to life by the Technicolor cinematography of Luigi Kuveiller, to the smooth and seamless tracking shots that offer a subjective glance into the scheming and voyeurstic mind of a psychopath. These stylistic attributes are given added resonance and impetus by an inspirational and much imitated soundtrack composed by Giorgio Caslini and arranged by progressive rock band Goblin. Led by Claudio Simonetti Goblin would almost single-handedly define the sound of Italian genre product in the 1970’s and 1980’s. The music shifts from the mysterious bass driven opening theme (itself indebted to Mike Oldfield’s Tubular Bells), to a creepy nursery rhyme leitmotif, to funk rock atmospherics too ultimately create a college of contemporary sound that fits perfectly with the artistic credentials of the film.

In one deft movement Argento manages to successfully bridge the gap between the trashy and exploitative realm of the giallo and traditions of Italian art cinema. He achieves this partly through his collaboration with Zapponi, but also through the self-conscious decision to cast David Hemmings as avant-garde musician turned amateur sleuth Marcus Daly. This provides an extra-textual link to Michelangelo Antonioni’s existential expose of swinging London Blow Up (1966). The themes of Argento and Antonioni crisscross regularly, and one can see that Argento was as much informed by the art cinema of his native country as he was by Hitchcock or the horror genre in a wider sense. However a key difference is that rather than explore the isolated psyche of the alienated loner contending with the difficulties of modernity (a major preoccupation of much Italian art cinema) Argento subverts this subjectivity to explore the perversity and insanity beneath the pretence of the bourgeois art world. In Deep Red artistic endeavour is strongly liked to femininity or homosexuality, and through art Argento is articulating a crisis in masculinity. This is played out in a number of witty encounters between Daly and the assertive and liberated journalist Giana Brezzi (played with wide-eyed brilliance by Daria Nicolodi). The most obvious the moment in which she beats Marc in an arm wrestling contest.

Art is being used in a metaphorical fashion, a metaphor for madness, insanity and eventually violent death. This is taken to an extreme when the murderers face and identity is almost submerged into a painting, the identity of the psychopath at one with the nightmarish artwork. Gialli live and die by the success or failure of their set piece death sequences. In Deep Red not only are they exceptional, but they seem to go beyond the narrative and into the realm of the poetic. They become the most artistic element of the film. They include a memorable and chilling sequence involving a mechanical dummy, and perhaps most horrifying of all a death by scalding. This is not an unconventional giallo though, and like most the narrative hinges on a past event that has been repressed - this is superbly hinted at by a prologue sequence that breaks up the opening credits, offering us a murder shot from a peculiarly low angle. This scene becomes the key to the whole film, and it remains a satisfying enigma until the films violent conclusion. One can even put aside the clichéd criticism of Argento’s narrative faults, in Deep Red every aspect of the plot works seamlessly with the story. One or two mistimed comedy moments aside Deep Red emerges as a lucid, artistic, metaphorical, symbolic and visually impressive film that even finds time for a progressive discussion of gender politics.
﻿© Shaun Anderson 2010
Posted by Shaun Anderson [The Celluloid Highway] at 16:06