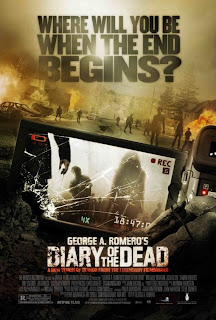 aka:
George A. Romero's Diary of the Dead


After the grossly bloated and highly compromised dross Land of the Dead (2005), the ponderous symbolism and allegory of George A. Romero returns again for the fifth entry in a saga that began in the age of civil rights and Vietnam. Each subsequent instalment of Romero’s Dead series has addressed the cultural anxieties of the day. Diary of the Dead doesn’t let the series down - the allegorical backdrop to this film being the changes wrought on America by the ‘war on terror’, reality TV, surveillance culture and the overriding sense that without documented footage an event doesn’t exist. With this in mind Romero’s extremely low budget works as an advantage (it has to be noted that few filmmakers could switch from a $15,000,000 budget to $2,000,000 with such ease) as he incorporates public domain newsreel footage, and grainy internet documentary material. 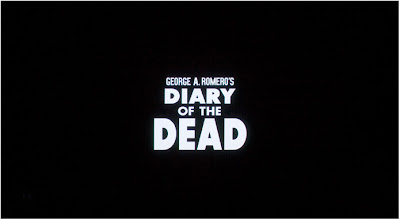 The film immediately signifies itself as highly self-reflexive with its narrative device of a film within a film, and the characters being film students from the University of Pittsburgh (Romero’s continued loyalty to his hometown is admirable). Therefore, it becomes somewhat impossible not to confront the satirical message of the digital camera culture we live in; this leads me to a major criticism of this, and other Romero films. Romero offers the audience no opportunity to make their own minds up about things, so intent is he on articulating his argument. It is a strong argument and it is persuasively constructed at a narrative and stylistic level. In this film the shaky digital camera footage is not a gimmick as in Cloverfield (2007) or The Blair Witch Project (1999) but is an essential cog in Romero’s criticism of modern society’s obsession with recording reality. Nevertheless, like previous entries Diary becomes the filmic equivalent of a sledgehammer. At least Romero acknowledges that reality becomes distorted if a single creative decision is made with the material, showing in one of the film’s best moments how documentary footage can be edited to express a very different reality. That it is the authorities doing the editing makes implicit Romero’s distrust of what the news organisations present to us. 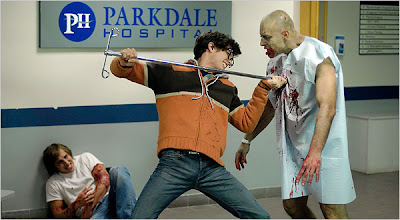 The zombies continue to be a droll and by now tired metaphor, but their role in the narrative is subservient to Romero’s satirical rant. In terms of gore and violence this film won’t disappoint, but it fails to reach the gruesome heights of Dawn of the Dead (1978) and Day of the Dead (1985). There is no doubt that this is a vast improvement on Land of the Dead, it has an edge and the requisite tone of despair and nihilism that one expects from Romero, but the film lives and dies by Romero’s choice to follow in the footsteps of Cloverfield and utilise the digital camera as the means of expression. The way that music for example is explained away, or how this ‘Diary’ is edited is achieved through a sloppy, unwelcome, and portentous voice over that irritates more than informs. The characters are unsurprisingly cardboard cut outs, with few performances to recommend – but I did rather like the doom laden film studies lecturer who moves from apathetic boozer to crossbow wielding bane of the undead (but this illustrates more than anything Romero’s haphazard attitude to character development.). This is a minor return to form for Romero, but surely, this metaphor has now worn thin. It would be interesting now to see Romero turn his attention to a non-zombie film.