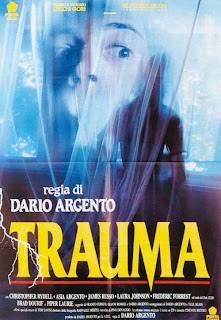 
It is a common consensus amongst horror aficionados that the output of Italian director Dario Argento has decreased significantly in quality from 1990 onwards. I’m not going to disagree with this. The films he has made since Opera (1987) have been patchy at best, and on occasion totally dreadful. His dire and pointless remake of Phantom of the Opera (1998) is perhaps the nadir. However it’s not all doom and gloom from the horror genre’s great visual stylist. His return to the giallo form with Sleepless (2000) was a success on many creative levels. Unfortunately Sleepless appears to be a blip as more recent efforts such as The Card Player (2004) and Mother of Tears (2007) have only confirmed that Argento must be suffering from senility.

It strikes me that two significant changes occurred with regard to Argento’s cinema post Opera (1987). The first is that during the 1990’s his work began to gain significant attention from academia. In my opinion films like Trauma and The Stendhal Syndrome (1996) suffer from a self-conscious aim to gain academic interest – mainly through the avenue of psychoanalysis and gender (The Stendhal Syndrome for example is built around a psychological condition, before it degenerates into a conventional rape/revenge thriller). This has led to Argento attempting to consider character and linear narrative as more prominent, when his forte lies in an elaborate and illogical narrative world of dreams, nightmares, and hallucinations. Secondly the 1990’s saw concerted efforts on Argento’s part to make his daughter Asia an international star. Unfortunately she simply isn’t good enough or charismatic enough to carry a film. Take her character in Trauma as an example; she is given some weighty issues to explore – anorexia, suicide, and generational psychosis, but the result in her hands is a dour and unimaginative creation with the animation of a chest of drawers.

Trauma is also unexpectedly dull within the terms of its visual style. Argento films live and die by their stylistics. Trauma consistently fails to excite on an aesthetic level. The narrative itself is perhaps too strongly influenced by the slasher film, and for all Argento’s psychoanalytical ideas (which are mere decoration to give the illusion of thematic weight and gravitas) the film is a series of violent set pieces, held together by a gossamer thin story (a lot of nonsense involving dead children and vengeful mothers). The method the killer uses to despatch his victims however is particularly imaginative and memorable, and affords Argento several opportunities to indulge in his trademark close ups. Unfortunately the whole mystery is screamingly obvious, and the film eventually peters out into a soporific and gag inducing romance.

The usual bag of Argento tricks are on show (a proliferation of subjective point-of-view shots – this is taken to painful degrees of pointlessness when we get one from the perspective of a butterfly!). The whole thing is bolstered by some reasonable actors (Piper Laurie & Brad Douriff), but the leads are bland and faceless. Even Tom Savini’s special make-up effects are looking jaded and tired, and this film beyond any other proved that Savini had outlived his usefulness. No doubt academics will attempt to reappraise this film as the years go by (academics have a boring habit of taking the direst of films by a director and making a case for them), but it won’t make any difference to this reviewer – this is low calorie Argento.
﻿© Shaun Anderson 2010
Posted by Shaun Anderson [The Celluloid Highway] at 20:54