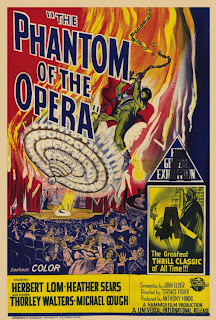 
Gaston Leroux’s 1908 novel The Phantom of the Opera has become one of the most durable and influential narratives of the 20th century and beyond. Like Dracula, Frankenstein and Dr. Jekyll and Mr. Hyde this tale of revenge, love, and tragedy has universal truths and myths which persist to this day. The index of this narratives cultural importance lies in the fact that a film adaptation emerges every ten to fifteen years to remind us that The Phantom is still playing away in the sewers beneath the Paris opera house and is unlikely to stop anytime soon. It was almost inevitable that Hammer Film Productions would create their own take on Leroux’s source material. By 1962 they had successfully rejuvenated and re-imagined the three heaviest hitters from Universal’s horror back catalogue; Dracula, Frankenstein and The Mummy. But Phantom of the Opera required a grandeur and a scale that Hammer had hitherto only hinted at. The resulting film would emerge as one of Hammer’s most controversial - a film of some moral ambiguity, lacking the bloody punch for which Hammer were well known for. It would be their first major commercial failure within the gothic horror form, and would lead to temporary exile for its director Terence Fisher. But if one single film in Fisher’s career could be said to embody both his style and his thematic obsessions then this is it. 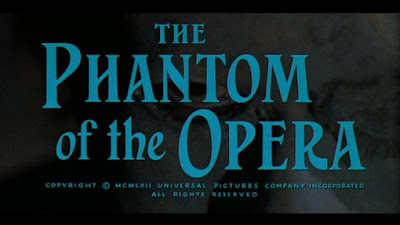 Part of the unevenness of the film is due to the fact that this film was initially tailored toward Hollywood actor Cary Grant. When Grant pulled out of the production, Hammer turned to Christopher Lee, but when Lee also proved unavailable they hit upon the idea of Herbert Lom, who at the time was making his horror debut. As a result of this film he would go on to become a genre favourite appearing in Mark of the Devil (1970) and Asylum (1972) to name just two. Lom was following in the footsteps of Lon Chaney and Claude Rains and by and large Lom is very good as the tortured artist Professor Petrie. He is certainly in another league compared to later attempts by Robert Englund, Julian Sands and Gerard Butler. The decision to make Petrie a sympathetic figure is one of the ways in which Hammer’s film differs, and the role of the villain goes to Michael Gough’s truly loathsome Lord Ambrose d’Arcy. Lord Ambrose is a magnificent creation, a slimy sex obsessed thief who opts to steal Petrie’s opera when the musician comes to him for aid. The screenplay by Anthony Hinds commit’s a major error however when d’Arcy survives (he merely leaves the film after seeing Petrie’s disfigured face) and goes unpunished for treating everyone like garbage. 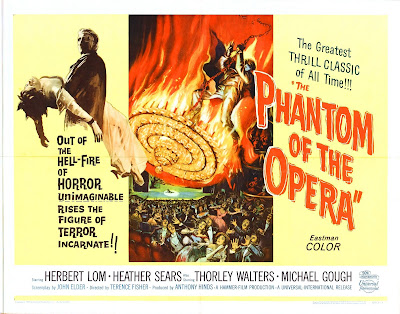 Petrie is given considerable screen time to develop as a character, and we learn of his plight through an extended flashback sequence. This is a brave decision, but the attempts to illicit audience sympathy seem somewhat wasted by the fate that befalls Petrie at the films end. Petrie doesn’t even commit the several acts of sabotage and murder that plague the Opera house, this is done by a sadistic dwarf (Ian Wilson) who assists him. One such sequence in which Petrie’s sidekick stabs a rat catcher (Patrick Troughton) in the eye is a moment of shock value which is rarely repeated in the film. Instead we spend most of our screen time in the company of Harry Hunter (a likeable romantic lead played by Edward de Souza) as he embarks on a spot of amateur detection. The opera singer Christine Charles (Heather Sears) is the surprise talent whom Petrie abducts so he can fulfil his dream to see his opera of Joan of Arc performed perfectly.

The decision to move the action from Paris to London is a good one, and affords the film a number of impressive outdoor sequences on the Bray Studios lot. The film has atmosphere in abundance, but the extended opera sequences are poorly delivered, statically directed, and hardly do justice to the excellent original music by Edwin Astley. But as a horror film The Phantom of the Opera is not a success. What we have instead is a wistful tale of thwarted dreams, a melancholy love story whose currency is regret and loss rather than blood and violence. In this respect it feels more like a Terence Fisher film than it does a Hammer one. There was always sense with Fisher’s horror films that he was yearning to go beyond the gothic iconography and the brains in jars into a more romantic realm and with this particular film he was able to do just that. This compromised the film both critically and commercially and it didn’t help that Anthony Hinds provided a screenplay with several major plot faults. Despite these shortcomings and the resulting moral weakness of the film this remains my personal favourite version of Gaston Leroux’s timeless tale.
﻿© Shaun Anderson 2010
Posted by Shaun Anderson [The Celluloid Highway] at 20:02