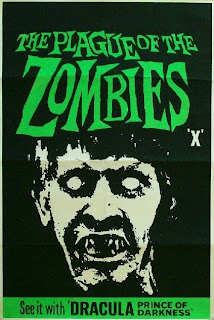 
This efficient and highly enjoyable Hammer film showed both the economic brilliance of Britain’s most successful independent production company and their willingness to experiment. The film was shot back to back at Bray studios with The Reptile (1966). Both films employed the same director John Gilling, the same technical personnel, and the same Cornish setting. The themes of both films intersect in interesting ways, and it is helpful to view both films as flip sides of the same coin. The setting is integral to both films, but probably more so to The Plague of the Zombies. The writer Peter Bryan is able to make the class dichotomy even more keener in a rural village riddled with resentment and superstition. And the insertion of a foreign menace in the shape of Haitian voodoo in an already polarised village aids the simmering tensions that Sir James Forbes (Andre Morell) and his daughter Sylvia (Diane Clare) encounter when they arrive to assist the local GP in uncovering the cause of an inexplicable outbreak of plague. 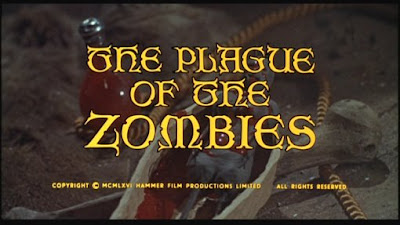 This was the first and only time Hammer would stray into the mystical territory of the zombie. The zombie sub-genre at this point had no history or lineage in British horror and the gut crunching hysterics of George A. Romero‘s Night of the Living Dead (1968) was still two years away. Further proof, if any is needed, that Hammer were willing to expand their remit and explore other avenues when they could have easily played safe. On the surface this appears to be a typically conservative and codified Hammer production. The middle class experts arrive to aid the superstitious peasants against a supernatural threat implicitly connected to the aristocracy. In this case the aristocrat is Squire Hamilton (John Carson), who rules the village with an iron fist and holds voodoo rituals in the cellar of his luxurious estate. 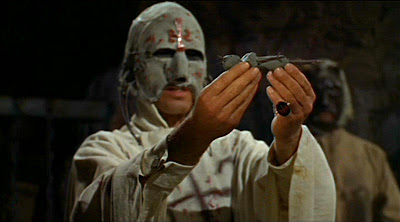 He is aided and abetted by some vile fox hunting upper class bastards who are concerned merely with their sport (and a touch of voodoo), and are even unconcerned when they interrupt a funeral procession, disturbing the coffin and leaving the corpse within in plain sight to one and all. Hamilton and his evil sidekicks are in the process of re-animating the corpses of the dead to slave away in a tin mine. The statement here is harsh and unforgiving; the working peasant class are exploited in life and in death. This is a deeply pessimistic message and one which is not alleviated by the lavish set designs and sumptuous art direction which often led to a distance and dilution of Hammer‘s class conscious message, as a result of this the film becomes possibly Hammer’s most undiluted attack on the British class system. The colonial element supports and aids this, showing that the British empire is literally using the traditions of other cultures purely for material gain. One could also view this in a more retrograde fashion and suggest that Hammer are not only showing the rottenness of colonialism, but also codifying the colonies through the backward motif of voodoo. 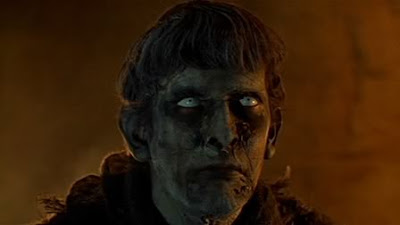 The film is not without some visual flourishes however. The dream sequence in which the undead arise from their coffins to terrorise Dr. Peter Thompson (Brook Williams) is incredibly striking, and concludes with a shocking decapitation. This is a truly hallucinatory and weird moment in a film that is otherwise rather staid and visually dull. Andre Morell is finally given top billing and creates one of Hammer’s most likeable experts, and he is supported by some fine performances from Jacqueline Pearce and John Carson. Aside from one or two inspired moments the direction by John Gilling is pedestrian, and doesn’t really build or improve on his earlier efforts in Hammer’s Shadow of the Cat (1961), but at least this time around he is working with a far better screenplay. This is a Hammer film with charm, substance, and intelligence, and is in fact a much more interesting film than Dracula: Prince of Darkness (1966) which was given top billing when the two films were released as a double feature.
﻿© Shaun Anderson 2010
Posted by Shaun Anderson [The Celluloid Highway] at 16:44