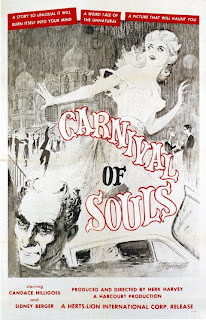 
The influence of Alfred Hitchcock’s Psycho (1960) took a number of years to filter through in American horror. Hammer were quick to gain inspiration from Hitchcock’s film with a series of monochrome thrillers in the early 1960’s the best of which was Taste of Fear (1961). But in the first half of the 1960’s American horror productions largely continued in the vein of the Roger Corman/Edgar Allan Poe films. A notable exception is producer/director Herk Harvey’s Carnival of Souls. Although Harvey also shoots in black and white, he generally rejects Psycho’s modernism in favour of an eerie Americana that exists out of time and has more in common with the traditions of the English ghost story. There is more than a hint of M. R. James about the proceedings making it a very atypical horror film for the 1960’s. This is perhaps why it is generally overlooked in discussions of the modern horror film. This is an America with a strange otherworldliness, a world of empty and foreboding churches, dark and labyrinthine roads and its centre a derelict carnival. The space of the American landscape is used to create a nightmare logic as the central character Mary tries to escape the feelings of dread and apprehension which plague her. At points the film switches to the structure of a road movie as Mary attempts to outrun a fate of which she can barely conceive. 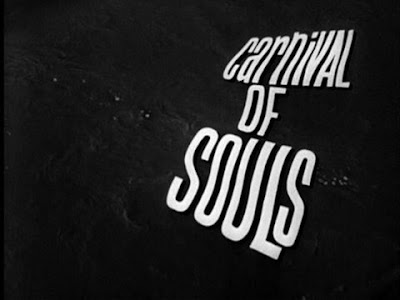 Harvey manages to create a palpably chilling atmosphere with a minimum of resources. The films budget was approximately $30,000 and Harvey achieves a lot through inspired decisions within the soundtrack. The camerawork is sometimes amateurish, but this is offset regularly by the creepy tones of a church organ. Mary is a church pianist, and giving her this profession represents a very clever piece of writing that works at the level of both character and sound. Equally important is the use of silence. Especially in the extended city sequences where Mary suddenly becomes deaf and invisible. These scenes become the surreal centre-piece of the film and show the alienating influence of modern city living. Harvey adds to the tension with weird and skewed camera angles, and an interesting approach to editing. The low budget occasionally draws attention to itself and at times the performances are less than satisfactory. But this can be forgiven for the sheer sense of dread and fear evoked by the spectral visitations that torment Mary on her journey into the unknown landscape. 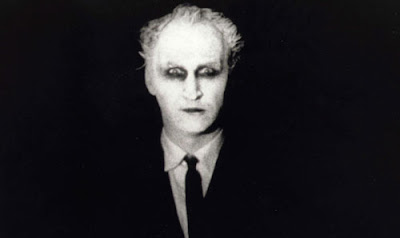 The film has a narrative structure not dissimilar to successful episodes of The Twilight Zone, a programme which was enjoying great popularity at the time Harvey made his film. Perhaps the strongest influence on the film was the writing of Rod Serling. The film opens with a trick scene that makes all the strange occurrences of the narrative even odder until the dawning realisation we reach at the finale. Whilst the mysteries and enigmas of the film are neatly tied up at the end a disturbing and disquieting feeling still remains. This is perhaps the films greatest success, and contributes to making Carnival of Souls unforgettable. What lingers most in the memory is not so much the final dance of death, or the spectres leaping out of mirrors or murky pools, but the vision of a rundown, depressed and dead America - the overriding sense that the real world is less alive than the gloomy afterlife the ghosts inhabit.
﻿© Shaun Anderson 2010
Posted by Shaun Anderson [The Celluloid Highway] at 17:11