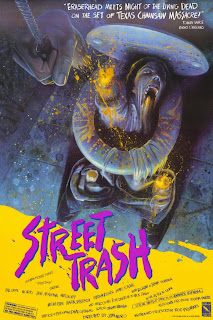 
Street Trash represents the height of horror absurdity, a film in which almost every taboo is not only explored, but satirised. Few horror films have such a brazen attitude to such subject matter as rape, castration, and out of control vagrancy. The vagrant community the film depicts is a vile cesspool. We feel not an ounce of sympathy for the street trash of the title. They are either homicidal, rapists, or thieves. In the wrong hands a film such as this could have been a truly abominable piece of cinematic excrement, but in the talented hands of director Jim Muro and writer/producer Roy Frumkes the result is a mind and body bending catalogue of carnivalesque imagery and laugh out loud dialogue. 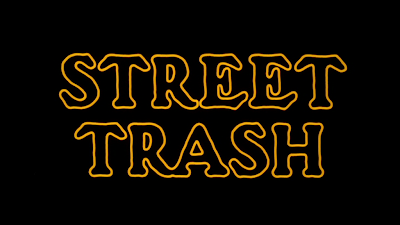 Frumkes had previous filmmaking experience with his excellent documentary Document of the Dead (1985) - an on set exploration of the making of George A Romero’s Dawn of the Dead (1978). The remainder of the crew of Street Trash were all pretty much first timers and students. Despite this and the obvious low budget this is a very cine-literate film which shows great generic knowledge in the manner it goes about upsetting the conventions of the form and our own expectations. Quite simply Street Trash is a film that is impossible to predict. This remains Jim Muro’s only credit as a director, but the accomplished use of the steadicam in the film has seen him go on to work on films such as Terminator 2: Judgement Day (1991), JFK (1991) and Crash (2004). The first example of this is in the opening chase sequence as we follow the films ostensible hero Fred (Mike Lackey - who was also responsible for much of the outlandish special make up effects) being pursued after a bit of thievery. This introduces an aspect of the film which remains throughout - an attention to cinematic detail. This is a rare low budget horror film that places huge importance on the camera (angles, position, movement), composition, framing, and editing. 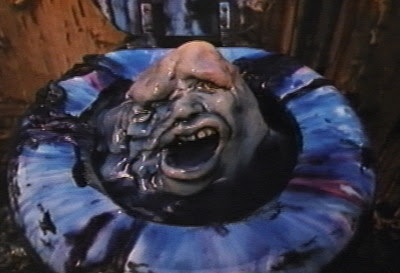 The narrative itself has quite a complex structure. The story is content to explore the milieu of the vagrants (including a very atmospheric junk yard), before it introduces the alcoholic beverage Viper, which causes all kinds of body popping and melting mayhem. The best sequence is a superbly choreographed steadicam sequence which ends with a vagrant flushing himself down a disused toilet! The illegal booze is just an excuse for the effects, but it lends itself well to a narrative that is meandering, episodic, and for large parts interested in exploring a gallery of grotesque characters - this includes the highly strung cop Bill (Bill Chepil) who has a penchant for throwing up on people he has just battered near to death. To confuse matters we also have a Vietnam veteran in the shape of the psychotic Bronson (Vic Noto) who is prone to having flashbacks and rules the junkyard like a giant rat atop a throne of garbage (the sequences in Vietnam are one of the weaker aspects of the film - possibly influenced by Troma‘s gruelling Vietnam veteran nightmare Combat Shock (1986)). Towards the end of the film Bronson is the character the narrative turns on, as a kind of love triangle emerges, love is perhaps the wrong word, Bronson is out to rape. Speaking of rape, the film includes a gang rape scene which is at odds with the tone of the film. As our ‘hero’ Fred is also involved this makes the scene one of the most problematic in the film. By contrast the scene in which a poor unfortunate is castrated, only then to have his penis used in a game of catch is brilliant in its audacity and fit’s the film perfectly.
﻿© Shaun Anderson 2010
Posted by Shaun Anderson [The Celluloid Highway] at 23:46