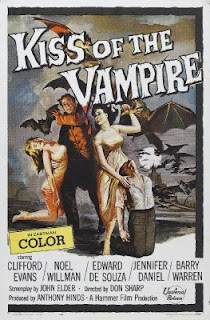 Dir: DON SHARP
Country: UK
By 1963 Hammer’s gothic horror formula was assured and still fresh enough not to seem stale and repetitive. Their productions at this point had an effortless feel as all aspects of the production worked in a seamless fashion, giving even badly written and derivative films a requisite atmosphere and gravitas of which they were perhaps undeserving. Kiss of the Vampire stands out in a number of important ways. Perhaps of paramount importance was the lack of ‘star’ names. Neither Peter Cushing nor Christopher Lee are on hand for this one, and instead Clifford Evans and Noel Willman are given the opportunity to spar against each other as vampire hunter and vampire. Both actors perform extremely well, but the commercial shortcomings on release and its relative obscurity since suggest that Evans and Willman may not have been first choice. Secondly the directorial responsibilities are handed to relative newcomer to the craft Don Sharp. 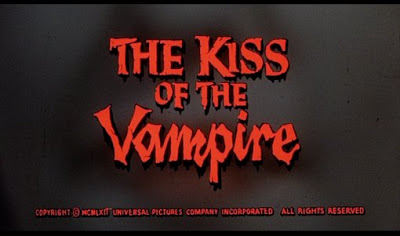 At this point in time Hammer’s gothic stalwart Terence Fisher was out of favour due to the critical and commercial failure of The Phantom of the Opera (1962). Sharp brings some distinctive techniques to the table which are complimented (at least initially) by the beautiful cinematography of Alan Hume. I say initially because the film has easily one of the most distinguished and impressive pre-title sequences in Hammer’s history. A prologue as it were that introduces Evans’ Professor Zimmer and marks him out as a vampire hunter devoid of the social grace and rationality of Professor Van Helsing. This is also a beautifully composed sequence that the film unfortunately fails to follow up. But it establishes with one act of surprising violence the palpable emotional and mental strain of a benighted community coming to terms with the encroachment of the supernatural. 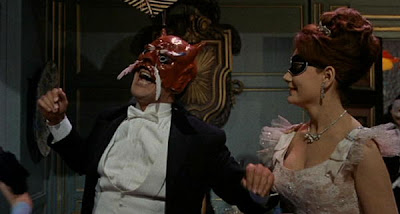 The films position toward technology and modernity is different to that espoused in Dracula (1958). In that film Van Helsing was seen too embrace the rationality of modern scientific advancement, and although science doesn’t defeat The Count, it is made clear that the celibacy and purity of Van Helsing is strongly allied to scientific progress. Here that position is reversed when newly married couple Gerald (Edward de Souza) and Marianne (Jennifer Daniel) run out of petrol and must leave the modern sanctity of their motor car too illicit aid from a superstitious Bavarian community held in thrall by Hammer’s stock family of corrupt or evil aristocrats. Their vulnerability and eventual manipulation begins the moment their car packs up and they first set eyes on the looming castle that towers like a monstrous sentinel over the village. What follows unfortunately is a rather routine and predictable tread through a set of conventions as the Harcourt’s are seduced by Dr. Ravna in his attempts to make Marianne a part of a secret coven of Vampires. The conflation of ritualistic cults, black magic, and vampire lore is one of the more interesting aspects of this film, and in some ways a prophetic forerunner to later entries in the witchcraft subgenre such as The Witches (1966) and The Devil Rides Out (1968). 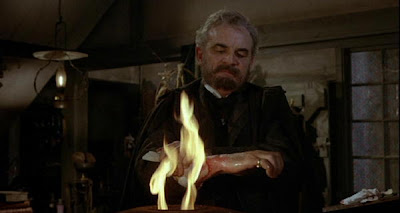 The film suffers for large periods due to a quite static style of direction, and although Sharp can conjure up some distinctive visuals, he lacks the editorial eye of a Terence Fisher whose films for Hammer are striking because of their parallels, doubling, and cross-cutting. For example there are endless scenes of piano recitals and the masked ball lacks any kind of dynamism and fluidity. When Marianne is held in thrall by Ravna, the film shifts noticeably into the realm of the uncanny as Gerald’s attempts to locate his wife are frustrated by a total denial of her existence. Professor Zimmer is the only one who believes in Gerald and despite his own alcoholism (another way in which the film challenges previous depictions of the Vampire hunter) agrees to save Marianne and destroy the coven. The anticipated face off between Ravna and Zimmer doesn’t actually materialise (a major fault of the film) and instead Zimmer invokes a black magic ritual and summons up a horde of giant Vampire bats to kill the witless coven. The image of the bats circling the castle ramparts is striking, but the models that tear at the cringing and cowardly vampires are pretty pathetic. All in all this a particularly weedy vampire cult. This is one of Hammer’s more offbeat and intriguing productions and there is enough here to warrant the film greater visibility in an age when much lesser films are being celebrated as masterpieces.
﻿© Shaun Anderson 2010﻿
Posted by Shaun Anderson [The Celluloid Highway] at 13:56