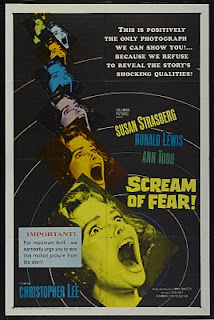 aka:
Scream of Fear


Despite gaining the moniker of “House of Horror” for its formulaic wanderings through the sublime world of gothic horror, Hammer were in fact long purveyors of generically diverse material. Throughout the late 1950’s World War Two dramas such as Yesterday’s Enemy (1959) and The Camp on Blood Island (1958) stood side by side with the ongoing adventures of Baron Frankenstein. In the early 1960’s Hammer embarked on a series of pirate adventures designed for the summer release schedules and titles such as Captain Clegg (1962) (US title Night Creatures), The Devil-Ship Pirates (1964) and Pirates of Blood River (1962) proved time and again Hammer’s adept ability at tapping into and sometimes creating trends. Perhaps the most successful of Hammer’s efforts to diversify were the monochrome suspense horror films inspired by the commercial success of Alfred Hitchcock’s Psycho (1960). Taste of Fear (1961) written by Jimmy Sangster (who also penned the screenplays for The Curse of Frankenstein (1957) and Dracula (1958)) were the first of these to take advantage of the market opened up by Hitchcock. 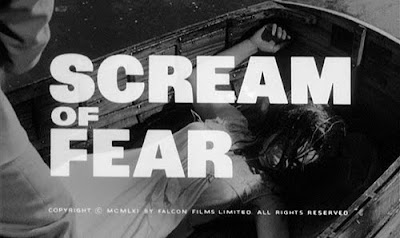 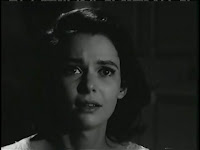 The commercial inspiration might have belonged to the master of suspense, but narrative inspiration was actually provided by the labyrinthine plot dynamics of Henri-Georges Clouzot’s Les Diaboliques (1955) - itself a major influence on Psycho. Sangster’s film shares a number of similarities that include a French setting, the recurring image of a bloated corpse, and a prominent role for a swimming pool. The films also share a concern with murder and madness in servitude of a large inheritance. Taste of Fear is not entirely derivative however. Much of the action takes place in an isolated and eerie gothic mansion and director Seth Holt makes excellent use of a restricted frame, shadows, and ill lit corridors to create a sense of tension and suspense. Into this disturbed space comes Penny Appleby (Susan Strasberg), a frail and vulnerable wheelchair bound young woman. Strasberg puts in an excellent performance that lies just at the edge of hysteria, but whose suspicions have strong foundation. Penny is consistently edgy and the subtext of her clashes with Jane Appleby (Ann Todd) are the cogs that keep the plot wheels moving. This is a rare horror film that provides strong and rounded female characters. 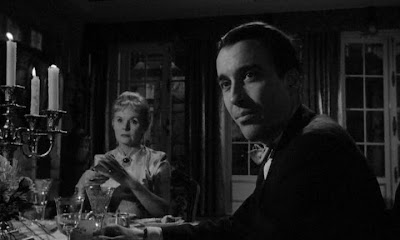 Considering this is a Hammer production, Seth Holt is allowed an unusual amount of liberty to direct with subtlety, intelligence and ingenuity. Excellent use is made of the monochrome palette and despite the slim running time Holt is able to invest a rare degree of depth into the characters. This is mainly due to how few there are, and agendas and motivations are indicated with the briefest of exposition. Simmering tensions bubble beneath the surface in a way that creates suspense that is very different to that seen in Hitchcock’s work. Although some of the plot revelations are predictable, the film still manages to spring a series of surprises at the conclusion. The iconic presence of Christopher Lee is used as a brilliant red herring as he turns in a rare sympathetic performance, and dodgy accent aside this is one of the great man’s best films. It is not difficult to see why Lee and others consider Taste of Fear one of Hammer’s best productions. Despite the derivative nature of the screenplay this is that rare Hammer film that is concerned solely with character and plot. This represents the high watermark of Hammer’s black and white psychological thriller cycle and one of Hammer’s best films of the 1960’s.
﻿© Shaun Anderson 2010
Posted by Shaun Anderson [The Celluloid Highway] at 14:54