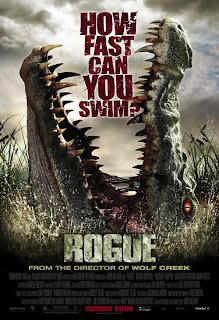 
Of all of the beasts and creatures to feature in the durable sub-genre of the revolt of nature horror film the crocodile by far is the most common. This is because the crocodile is not really revolting against mankind, but instead continuing its centuries old struggle against its human oppressor. Therefore these types of films immediately have a resonance and realism that killer insects, spiders, and sundry household pets lack. Despite having this primal advantage over other creatures in this cycle, the killer crocodile has still consistently failed as a cinematic proposition. Lacklustre and shallow efforts such has Lake Placid (1999), Crocodile (2000), and Blood Surf (2000) showed the limitations of digital effects, a technology that should have helped to realise the potential of this form. The more notable precursor for Greg Mclean’s entry Rogue is the little seen Black Water (2007), which was inspired by true events. A film that is less concerned with close ups of gory death in the marauding mouth of a croc and instead more interested in character. Unfortunately Rogue isn’t interested in either character or gory death. 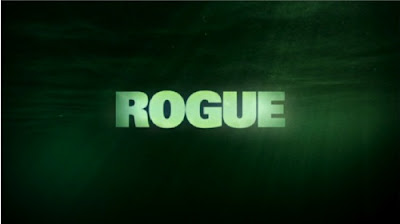 Mclean burst onto the international scene with the gruelling sadism of Wolf Creek (2005). A film that took advantage of the torturous territory opened up by Saw (2004) and Hostel (2005), in order to offer a terrifying glimpse into a landscape that can swallow people up and leave no trace of their whereabouts. Mclean partly returns to this in Rogue, but this time it is the rivers, waterways and tributaries of Australia’s Northern Territory that prove difficult to escape. Mclean is concerned with the investigation of the pretence of civilisation - the thinness of community and of society, a reminder of the slender veneer that separates us from the world of sadistic torturers and killer crocodiles. In this sense Mclean is tapping into fears that emerge from the cosseted age of modern technology and suburbia - and if he continues to develop and refine this theme Mclean will become a major figure within the horror genre.

Rogue is perhaps the least auspicious vehicle for any kind of authorial argument in Mclean’s cinema. The film follows an outsider in the shape of American travel writer Pete McKell (Michael Vartan), he is a cynic whose latest assignment has taken him to a boat trip in the Kakadu National Park. His outsider status is over-emphasised and as a result the clichés begin to pile up as we are introduced to a multitude of boring characters aboard the boat. And then not a lot happens…however we are asked to admire the landscape, and the rich vegetation, canyons and clear blue skies are photographed beautifully by Will Gibson. The daylight scenes are simply glorious, and it becomes clear that the landscape is really the main character of this film. After following a mysterious flare (we never get to find out who shoots this flare and why) the boat ends up in territory that is overflowing with myths and legends. This idyllic paradise is then shattered by the arrival of your not so friendly neighbourhood crocodile, and the holidaymakers find themselves waylaid on a small island which will inexorably be covered by the tide. The main criticism of the film is in the infrequency of the crocodile attacks and the singular failure to invest the beast with the brooding presence that made Jaws (1975) such a terrifying cinematic experience. Up to this point however the film has built slowly but soundly towards a climax that is both ludicrous and impressive. We get to see plenty of the crocodile in its lair, and if earlier examples had failed due to a misuse of digital effects the crocodile here is very impressive.
﻿
© Shaun Anderson 2010
Posted by Shaun Anderson [The Celluloid Highway] at 16:38